The Women of Rothschild: The Untold Story of the World's Most Famous Dynasty (Hardcover) 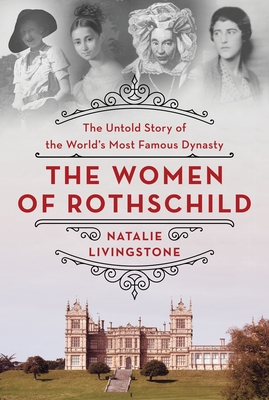 The Women of Rothschild: The Untold Story of the World's Most Famous Dynasty (Hardcover)

In The Women of Rothschild, Natalie Livingstone reveals the role of women in shaping the legacy of the famous Rothschild dynasty, synonymous with wealth and power.

From the East End of London to the Eastern seaboard of the United States, from Spitalfields to Scottish castles, from Bletchley Park to Buchenwald, and from the Vatican to Palestine, Natalie Livingstone follows the extraordinary lives of the Rothschild women from the dawn of the nineteenth century to the early years of the twenty-first.

As Jews in a Christian society and women in a deeply patriarchal family, they were outsiders. Excluded from the family bank, they forged their own distinct dynasty of daughters and nieces, mothers and aunts. They became influential hostesses and talented diplomats, choreographing electoral campaigns, advising prime ministers, advocating for social reform, and trading on the stock exchange. Misfits and conformists, conservatives and idealists, performers and introverts, they mixed with everyone from Queen Victoria to Chaim Weizmann, Rossini to Isaiah Berlin, and the Duke of Wellington to Alec Guinness, as well as with amphetamine-dealers, suffragists and avant-garde artists. Rothschild women helped bring down ghetto walls in early nineteenth-century Frankfurt, inspired some of the most remarkable cultural movements of the Victorian period, and in the mid-twentieth century burst into America, where they patronized Thelonious Monk and drag-raced through Manhattan with Miles Davis.

Absorbing and compulsive, The Women of Rothschild gives voice to the complicated, privileged, and gifted women whose vision and tenacity shaped history.

Natalie Livingstone was born and raised in London. She graduated with a first class degree in history from Christ's College, Cambridge in 1998. She began her career as a feature writer at the Daily Express and now contributes to Tatler, Harper's Bazaar, US Vogue, Elle, The Times and The Mail on Sunday. Natalie lives in London with her husband and three children. She is the author of The Mistresses of Cliveden and The Women of Rothschild.

“Reads like an epic novel...impressively researched and beautifully written.” –The Wall Street Journal

“Deeply researched...This is a rich history to dip in and out of–each generation of the tangled family tree provides Livingstone with fascinating women of wealth and influence who found important ways to defy the expectations of their era.” - Vogue, “Best Books for Fall 2022”

“Never before have the lives of the family's women been explored in such intelligent, entertaining detail as in Natalie Livingstone's new must read.” –Town & Country

“Livingstone’s vital and compelling book fills a gap in Jewish and women’s history and will appeal to readers of both. The book includes extensive notes, an index, and a very helpful family tree.” –Library Journal (starred)

“[A] comprehensive and colorful group biography of the women of the Rothschild dynasty…Livingstone expertly mines diaries, memoirs, and letters for vivid anecdotes…This sparkling history is full of riches.” --Publishers Weekly

"In this gripping biography, Natalie Livingstone shows that Rothschild women were the velvet gloves guiding the iron fists of their male relatives and far from being mere appendages, they acted as trusted confidants and silent partners." --Hannah Rothschild, author of The Improbability of Love

"This brilliantly researched and scintillatingly written book is proof positive that the female of the Rothschild species were even more fascinating and talented than the males." --Andrew Roberts, author of Churchill: Walking with Destiny

Praise for The Mistresses of Cliveden:

“[Livingstone’s] portraits of strenuous and assertive women who resisted subjection, sometimes deploying their sexual allure to succeed, on other occasions drawing on their husband’s wealth, are astute, spirited, and empathetic.” —The Wall Street Journal

“Any of her action-filled chapters would merit a mini-series.”—The New York Times Book Review

"Lovers of modern English history and the scandals that infiltrated upper-crust society will find much to enjoy in this work.”—Library Journal