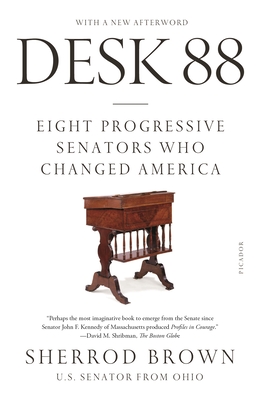 Since his election to the U.S. Senate in 2006, Ohio’s Sherrod Brown has sat on the Senate floor at a mahogany desk with a proud history. In Desk 88, he tells the story of eight of the Senators who were there before him.

"Perhaps the most imaginative book to emerge from the Senate since Senator John F. Kennedy of Massachusetts produced Profiles in Courage." —David M. Shribman, The Boston Globe

Despite their flaws and frequent setbacks, each made a decisive contribution to the creation of a more just America. They range from Hugo Black, who helped to lift millions of American workers out of poverty, to Robert F. Kennedy, whose eyes were opened by an undernourished Mississippi child and who then spent the rest of his life afflicting the comfortable. Brown revives forgotten figures such as Idaho’s Glen Taylor, a singing cowboy who taught himself economics and stood up to segregationists, and offers new insights into George McGovern, who fought to feed the poor around the world even amid personal and political calamities. He also writes about Herbert Lehman of New York, Al Gore Sr. of Tennessee, Theodore Francis Green of Rhode Island, and William Proxmire of Wisconsin.

Together, these eight portraits in political courage tell a story about the triumphs and failures of the Progressive idea over the past century: in the 1930s and 1960s, and more intermittently since, politicians and the public have successfully fought against entrenched special interests and advanced the cause of economic or racial fairness. Today, these advances are in peril as employers shed their responsibilities to employees and communities, and a U.S. president gives cover to bigotry. But the Progressive idea is not dead.

Recalling his own career, Brown dramatizes the hard work and high ideals required to renew the social contract and create a new era in which Americans of all backgrounds can know the “Dignity of Work.”

Sherrod Brown, Ohio’s senior U.S. senator, has dedicated his life in public service to fighting for what he calls “the dignity of work”—the belief that hard work should pay off for everyone. He resides in Cleveland with his wife, Connie Schultz, a Pulitzer Prize–winning columnist and author. They are blessed with a growing family, including three daughters, a son, and seven grandchildren.

"Perhaps the most imaginative book to emerge from the Senate since Senator John F. Kennedy of Massachusetts produced Profiles in Courage." —David M. Shribman, The Boston Globe

"Brown’s elegant portraits of his desk 88 predecessors have marvelous historical value . . . What makes Desk 88 particularly engaging are anecdotes illuminating the heroes’ convictions and character . . . The book’s last chapter, detailing Brown’s view of what Democrats should stand for in the age of Trump, reads like a thoughtful first draft of the party platform." —Douglas Brinkley, The Washington Post

"[A] delightful book . . . most revealing is Brown’s analysis of his 2018 reelection by seven points in a state Trump carried by eight . . . his ideology . . does not block his capacity for empathy." —E.J. Dionne, The Washington Post

"Highly readable and engaging. [Brown's] profiles of the eight Democratic senators are enlightening, even for the most famous . . . the unique value of [Brown's] book is in his quintessential defense of liberal ideals." —Darrel Rowland, The Columbus Dispatch

"A timely history of 20th-century American progressivism . . . [Brown] offers a stout defense of such progressive policies as Social Security and Medicare. This thoughtful, entertaining book will appeal to liberals and students of congressional history." —Publishers Weekly

“Senator Sherrod Brown is a fearless force for progressive change whose strong voice and powerful vision have helped lift up hardworking families across America over decades. As American families confront the growing income disparity that is at the root of the crisis of confidence felt by so many, Senator Brown’s Desk 88 delivers a timely call to action and reminds us all of our shared responsibility to expand opportunity, strengthen our democracy, and advance a brighter and more just and equal future for all.” —House Speaker Nancy Pelosi

“Sherrod Brown has always been a fighter for people and progress, and here he offers readers a window into the past that ties our shared history to the hard, important work that needs to be done to move our country forward.” —Hillary Clinton

“In Desk 88, Sherrod Brown, a formidable writer as well as a formidable fighter for a more just America, presents the stories of eight progressive senators in riveting, entertaining, and deeply moving detail. This book is political history at its best—we come to understand his subjects’ triumphs, failures, ambiguities, and inner lives with an intimacy that perhaps only a fellow senator can provide.” —Martin Sheen

"Sherrod Brown’s day job as a U.S. Senator provides incentives and occasions for thinking about eight men who shared many of his progressive views and the desk at which he now advocates them. Such is his infectious enthusiasm for his predecessors, you do not need to share his politics in order to enjoy his story of the continuity he feels with the men who sat where he sits." —George F. Will, Pulitzer Prize-winning journalist and author of A Nice Little Place on the North Side

“Sherrod Brown’s insightful and delightfully written account of eight progressive senators over the past century provides a brilliant history of the progressive movement in the United States, relating the contributions of each of these senators to the fight against America’s most pressing problems. It is an inspiring and useful read for anyone who wants to understand the state of America’s politics today.” —Joseph Stiglitz, Nobel Prize–winning economist

“This is an innovative work of institutional history unlike anything I’ve read before. In Desk 88, Senator Brown offers gripping biographies of the past occupants of his Senate seat, interspersed with his own thoughts about the present and future of progressivism. A terrific read.” —Kevin M. Kruse, professor of history at Princeton University

“In Desk 88, veteran U.S. senator Sherrod Brown sets forth his case for progressive legislation in the context of an activist government that seeks to improve the lives of working Americans. An assiduous student of American congressional history, Brown has created a lively, absorbing, in-the-heat-of-combat narrative about those ‘bright, meteoric, and short-lived’ periods in American history when progressive ideals have triumphed in shaping national legislation. His unique format of examining the careers of notable former Senate progressives alongside his own decades of legislative education and struggle guarantees this compelling volume a place on the short shelf of important works that memorably explore how our nation’s laws actually get made.” —Richard A. Baker, US Senate historian emeritus and coauthor of The American Senate: An Insider’s History