A Death in Tokyo: A Mystery (The Kyoichiro Kaga Series #3) (Hardcover) 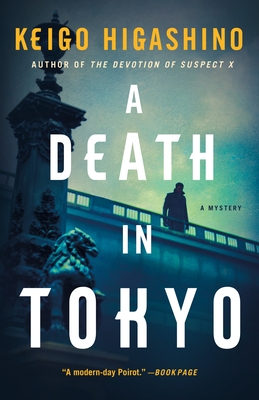 A Death in Tokyo: A Mystery (The Kyoichiro Kaga Series #3) (Hardcover)

This is book number 3 in the The Kyoichiro Kaga Series series.

In the latest from international bestselling author Keigo Higashino, Tokyo Police Detective Kaga is faced with a very public murder that doesn't quite add up, a prime suspect unable to defend himself, and pressure from the highest levels for a quick solution.

In the Nihonbashi district of Tokyo an unusual statue of a Japanese mythic beast - a kirin - stands guard over the district from the classic Nihonbashi bridge. In the evening, a man who appears to be very drunk staggers onto the bridge and collapses right under the statue of the winged beast. The patrolman who sees this scene unfold, goes to rouse the man, only to discover that the man was not passed out, he was dead; that he was not drunk, he was stabbed in the chest. However, where he died was not where the crime was committed - the key to solving the crime is to find out where he was attacked and why he made such a super human effort to carry himself to the Nihonbashi Bridge. That same night, a young man named Yashima is injured in a car accident while attempting to flee from the police. Found on him is the wallet of the murdered man.

Tokyo Police Detective Kyoichiro Kaga is assigned to the team investigating the murder - and must bring his skills to bear to uncover what actually happened that night on the Nihonbashi bridge. What, if any, connection is there between the murdered man and Yashima, the young man caught with his wallet? Kaga's investigation takes him down dark roads and into the unknown past to uncover what really happened and why.

A Death in Tokyo is another mind-bending mystery from the modern master of classic crime, finalist for both an Edgar Award and a CWA Dagger, the internationally bestselling Keigo Higashino.