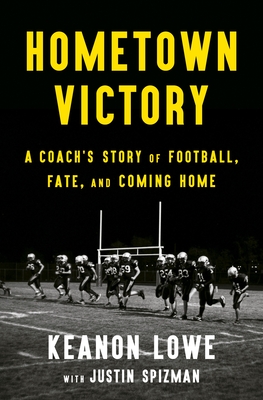 The Blindside meets Friday Night Lights in Keanon Lowe's Hometown Victory when an NFL coach returns home after losing a friend to coach a team of struggling high school kids on a 23-game losing streak.

Keanon Lowe was working as an offensive analyst for the San Francisco 49ers when his childhood friend and former high school teammate suddenly died from an opioid overdose. Keanon dropped everything––including the plum NFL job he had been working towards since childhood––leading him to a position as football coach at a struggling high school back in his hometown. At the time, Parkrose High School was in the middle of a 23-game losing streak--they were the ultimate underdogs.

In many ways, the road to Parkrose was paved by Keanon's life-defining experiences––from a childhood spent dodging racist bullies and finding the support and mentorship he craved on the football team, to an NFL season where he worked closely with Colin Kaepernick as he evolved his sideline protest. Keanon was drawn to the young men on the Parkrose team, and to the school itself. After two years, he pushed them to become conference champions, mentoring countless players along the way.

But still, there was that nagging sense that his calling wasn't meant to stop there. He was at that school for a reason. In May 2019, he got his answer when a 19-year-old student entered a Parkrose classroom with a trench coat and shotgun. Keanon disarmed him and pulled the boy into a hug, telling him he cared. In the boy, Keanon saw himself, and the young men he grew up with or mentored along the way––and weren't so many of them just looking for acceptance, for comfort, for love?

With the heart of favorite football classics––The Blindside, Friday Night Lights, Remember the Titans––Keanon’s journey at Parkrose is the true account of a life spent striving forward, even when faced with the unimaginable. Hometown Victory is a story about gratitude, service, and most of all, hope.

Keanon Lowe is football coach and former D1 football player for the Oregon Ducks. He gained widespread media attention in May of 2019 after disarming an active school shooter and embracing him until the police arrived. After playing as a wide receiver for half a decade, Lowe went to work in Philadelphia as an analyst for the Philadelphia Eagles and then an offensive analyst for the San Francisco 49ers. He was the head coach for both football and track and field at Parkrose High School.

Justin Spizman is an award-winning and bestselling author, ghostwriter, and editor. He has worked on We Rise with Xiuhtezcatl Martinez, Taking Your Team to the Top with Ted Sundquist, and is the coauthor of Don’t Give Up . . . Don’t Ever Give Up: The Inspiration of Jimmy V. Justin currently lives in Atlanta, Georgia, with his wife, Jaime, their two beautiful daughters Dani and Bella, and their rambunctious dog, Bodhi.

“Hometown Victory is much like its author: authentic, heartfelt, honest. This is a book of heartbreak and triumph, humility and life lessons. If you‘re a student, player, coach, parent, educator . . . read this book.“
—Gene Wojciechowski, ESPN reporter and New York Times bestselling author of The Last Great Game

“A true story with an incredible model of determination, resilience, and grit. Keanon walks in the world with a sense of purpose that is grounded in love for humankind. The chapters challenge you to look inward and make decisions based on integrity and justice. Your life will be enhanced by reading this book.“
—Arshay Cooper, Indie bestselling author of A Most Beautiful Thing

"Inspiring reading for students and teachers striving for excellence against the odds."
—Kirkus