Shadow & Claw: The First Half of The Book of the New Sun (Hardcover) 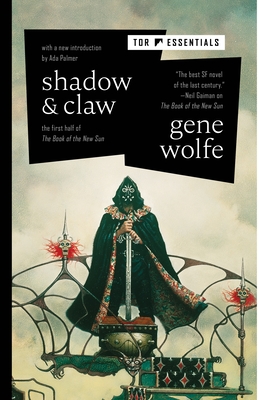 Shadow & Claw: The First Half of The Book of the New Sun (Hardcover)

“A major work of twentieth-century American literature...Wolfe creates a truly alien social order that the reader comes to experience from within...once into it, there is no stopping.” ­—The New York Times on The Book of the New Sun

This new Tor Essentials edition of Sword & Citadel contains a new introduction by historian and novelist Ada Palmer, author of the award-winning Too Like the Lightning.

Gene Wolfe has been called "the finest writer the science fiction world has yet produced" by the Washington Post.

THE BOOK OF THE NEW SUN is unanimously acclaimed as Wolfe’s most remarkable work, hailed as “a masterpiece of science fantasy comparable in importance to the major works of Tolkien and Lewis” by Publishers Weekly and “one of the most ambitious works of speculative fiction in the twentieth century” by the Magazine of Fantasy & Science Fiction.

The Sword of the Lictor is the third volume in Wolfe's remarkable epic, chronicling the odyssey of the wandering pilgrim called Severian, driven by a powerful and unfathomable destiny, as he carries out a dark mission far from his home.

The Citadel of the Autarch brings The Book of the New Sun to its harrowing conclusion, as Severian clashes in a final reckoning with the dread Autarch, fulfilling an ancient prophecy that will alter forever the realm known as Urth.

"Wonderfully vivid and inventive... the most extraordinary hero in the history of the heroic epic.” —The Washington Post

Gene Wolfe (1931-2019) was the Nebula Award-winning author of The Book of the New Sun tetralogy in the Solar Cycle, as well as the World Fantasy Award winners The Shadow of the Torturer and Soldier of Sidon. He was also a prolific writer of distinguished short fiction, which has been collected in such award-winning volumes as Storeys from the Old Hotel and The Best of Gene Wolfe.

A recipient of the World Fantasy Award for Life Achievement, the Edward E. Smith Memorial Award, and six Locus Awards, among many other honors, Wolfe was inducted into the Science Fiction Hall of Fame in 2007, and named Grand Master by the Science Fiction and Fantasy Writers of America in 2012.