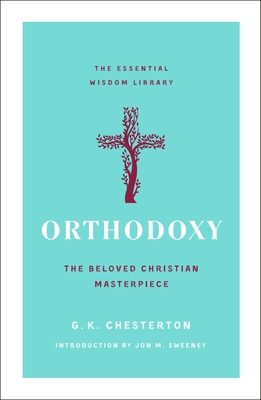 A classic of Christian apologetics

Part spiritual autobiography, part apologetics, Orthodoxy is G.K. Chesterton's account of his own journey to faith. Chesterton didn’t set out to write a defense of Christian thought, instead he hoped to recount how he personally became a believer. However, in doing so, he penned one of the great classics of Christian writing, a book that has influenced countless people and continues to speak compellingly to our modern day.

Chesterton writes about his journey of faith with wit, charm, and a razor-sharp intellect, undermining casual assumptions and lazy speculations in a relentless search for truth and meaning.

Orthodoxy is the next title in the Essential Wisdom Library, a series of books that seeks to bring spiritual wisdom—both modern and ancient—to today’s readers. Featuring a foreword by Jon Sweeney, this new edition of the classic text is a must read for seekers and believers alike.

G.K. Chesterton was an English writer, philosopher, and theologian who lived and wrote at the turn of the 20th century. He was a prolific writer, producing fiction and nonfiction along with essays, poetry, and plays. Chesterton is best known for his creation of the priest-detective character Father Brown and for his book Orthodoxy which has become a classic of Christian apologetics.

JON M. SWEENEY is an independent scholar and an award-winning writer. He is a biographer of St. Francis of Assisi and translator of his writings, and his books on Franciscan subjects have sold more than two hundred thousand copies. Jon is the author of more than forty books, including The Pope Who Quit, which was optioned by HBO. He is editor in chief and publisher of Paraclete Press. He’s appeared on CBS Saturday Morning and numerous other programs, and writes regularly for America magazine in the US, and The Tablet in the UK. Jon is married to Rabbi Michal Woll; their interfaith marriage has been profiled in national media. He's the father of four, and lives in Milwaukee.