Test Gods: Virgin Galactic and the Making of a Modern Astronaut (Paperback) 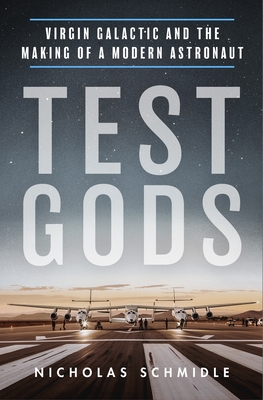 Test Gods: Virgin Galactic and the Making of a Modern Astronaut (Paperback)

In the spirit of The Right Stuff, updated for the 21st century, Test Gods is an epic story about extreme bravery and sacrifice, about the thin line between lunacy and genius. Most of all, it is a story about the pursuit of meaning in our lives—and the fulfillment of our dreams.

Along the way, Schmidle weaves his relationship with his father—a former fighter pilot and decorated war hero—into the tragedies and triumphs that Branson’s team confronts out in the Mojave desert as they design, build, and test-fly their private rocket ship. Gripping and novelistic, Test Gods leads us, through human drama, into a previously unseen world—and beyond.

Nicholas Schmidle writes for the New Yorker and is the author of To Live or to Perish Forever: Two Tumultuous Years in Pakistan. His work has also appeared in the New York Times Magazine, the Atlantic, Slate, the Washington Post, and many others. Schmidle has been a National Magazine Award finalist, a two-time Livingston Award finalist, and winner of a Kurt Schork Award. He is a former fellow at the Institute of Current World Affairs, the New America Foundation, and the Woodrow Wilson International Center for Scholars and a former resident at the Rockefeller Foundation’s Bellagio Center. In 2017, Schmidle was a Ferris Professor of Journalism at Princeton University. He currently lives in London with his family.

“A riveting account of the underreported commercial space race, which has up until now lacked a worthy storyteller…The sections of the book that narrate how Virgin Galactic gets to space are replete with white-knuckled descriptions of booster rockets, pilots braving the ‘transonic zone,’ everything you’d hope to read were Mailer or Wolfe alive today to tell the tale…[a] deeply reported and deeply personal book. It is a masterly work, a reminder of what should inspire us all.”
—The New York Times Book Review

“[I]n a cinematic style that moves seamlessly in and out of characters’ inner monologues…[and] fluid, precise prose…[Schmidle drops] the journalist’s pretension of total detachment…Schmidle's care…sets this book apart from more familiar representations of airborne masculinity.”
—The Washington Post

“Test Gods tells the story of Mark Stucky, the lead test pilot for Virgin Galactic, a space tourism startup in Mojave, California, as he…become[s] one of the rare non-NASA pilots to earn astronaut wings…At its center, however, it is a story of fathers and sons—and this emotional core ought to grab readers who might not care about rocket propellant or lifting surfaces or horizontal stabilizers…Test Gods is a human story…a gripping, comprehensive, and deeply felt book.”
—The American Scholar

“It’s hard to know where to begin: Test Gods is unique, fascinating, compulsively readable, brilliantly reported with unprecedented access, a kick-ass adventure story of the last of the great swashbucklers addicted to speed and altitude. It is a journey unlike any I have ever read, as pulsating as it is poignant and personal. What makes a man routinely risk his life for a living umpteen miles above the clouds? What does he leave behind on earth? Cosmic questions that Schmidle answers with elegance and beauty and pace. Just strap yourself in and get ready for one helluva ride.”
—Buzz Bissinger, author of Friday Night Lights

"If you want to know what being a test pilot truly looks and feels and even smells like, read this riveting book. Schmidle has done something remarkable, capturing all the visceral grit we experience inside the cockpit, in addition to all the tragedies and triumphs that we encounter along the way. This is the book about the New Space Race you've been waiting to read. An instant classic."
—Scott Kelly, astronaut and New York Times bestselling author of Endurance: My Year in Space, a Lifetime of Discovery

“Test Gods is an absolutely stunning piece of work. The intimacy of this book is a testament to Schmidle’s journalistic superpowers. He is more than a fly on the wall: he’s immersed in the lives of these test pilots, and he’s written a feverish, true-life thriller that burns with emotional energy.”
—Martha Raddatz, co-anchor of ABC’s “This Week” and New York Times bestselling author of The Long Road Home

“A hurtling narrative about the test pilots of the Virgin Galactic space program, Test Gods is a hugely ambitious feat of reporting and storytelling and a fitting twenty-first-century sequel to The Right Stuff. Schmidle captures not just the technical wizardry of the spaceships and the envelope-pushing prowess of the pilots, but also the very real costs, for the pilots and their families, of reaching for something beyond this world. This is a saga not just of bravery and derring-do, but of a kind of undaunted old fashioned hope that feels all too rare these days."
—Patrick Radden Keefe, New York Times bestselling author of Say Nothing

"Vivid portraits bring to life the people behind the bold project... With brisk prose, extensive interviews, and plenty of panache, Schmidle captures ‘the difference between fighter pilots and everybody else.’ The result is a page-turner, perfect for anyone in search of a story about the incredible coming within reach."
—Publishers Weekly, *starred review*

“The thrilling, perilous, and sometimes deadly adventures of the people who are making the dream of commercial space travel a reality…[Schmidle] applies his personal interest in aerospace subjects to this book’s extensive research and in-depth interviews.”
—Library Journal, *starred review*

“[Schmidle juggles] journalistic objectivity, clear admiration for his pioneering biographical subjects, and tribute to his father…Schmidle’s agile, compassionate narratives serve as an exciting first word on the subject. A candid and revealing portrayal of extraordinary people striving to breach one of humanity’s final frontiers.”
—Kirkus Reviews