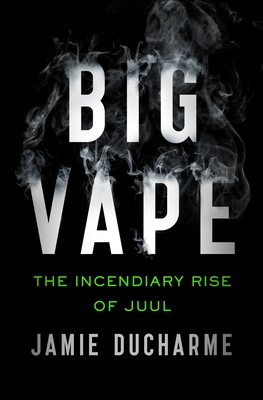 A Publishers Weekly Top Ten Book of the Summer (2021)

A propulsive, eye-opening work of reporting, chronicling the rise of Juul and the birth of a new addiction

It began with a smoke break. James Monsees and Adam Bowen were two ambitious graduate students at Stanford, and in between puffs after class they dreamed of a way to quit smoking. Their solution became the Juul, a sleek, modern device that could vaporize nicotine into a conveniently potent dosage. The company they built around that device, Juul Labs, would go on to become a $38 billion dollar company and draw blame for addicting a whole new generation of underage tobacco users.

Time magazine reporter Jamie Ducharme follows Monsees and Bowen as they create Juul and, in the process, go from public health visionaries and Silicon Valley wunderkinds to two of the most controversial businessmen in the country.

With rigorous reporting and clear-eyed prose that reads like a nonfiction thriller, Big Vape uses the dramatic rise of Juul to tell a larger story of big business, Big Tobacco, and the high cost of a product that was too good to be true.

Jamie Ducharme is a correspondent at Time magazine, where she covers health and science. Her work has won awards from the Deadline Club, the New York Press Club, and the Newswomen’s Club of New York. Originally from New Hampshire, Jamie now lives in Brooklyn. Big Vape is her first book.

"Ducharme shines a light on the company's exceptional rise in this un-put-downable saga."
—Newsweek

"Fair and well researched...Ducharme zooms in squarely on the inner workings of Juul...willing to accept that we may have, partially, panicked...[a] nuanced assessment."
—The New Republic

"It’s a whirlwind ride to the top...a story of unexpectedly high drama...for those wondering how a smoking cessation product could seize so much public attention, Big Vape holds some fascinating answers."
—Boston Magazine

"Journalist Ducharme charts the meteoric rise, subsequent missteps, and resulting misfortunes of e-cigarette company Juul in her brisk and thorough debut. Juul started as a graduate design project in 2005 by cofounders James Monsees and Adam Bowen; their aim was 'to change what it meant to consume nicotine.'....Ducharme presents an evenhanded retelling of the company’s scandals up to the point, in 2020, when Monsees and Bowen left."
—Publishers Weekly (starred review)

"Big Vape is a dazzling story that crackles with the energy of a nicotine buzz, mixing tales of groundbreaking innovation with those of corporate greed and government dysfunction. More than anything, this is a story about American capitalism today, and it explains why a new generation is hooked on the most addictive of drugs. This is a landmark piece of investigative reporting."
—Christopher Leonard, author of the New York Times bestseller Kochland

"Big Vape is more than just brilliantly reported and elegantly written. It is also a richly populated book—filled not just with human characters, but with matters of science, finance, invention, ambition, ethics, hubris and blazing ingenuity. Even the cunning little product at the center of the story—the Juul itself—becomes a sort of character in Jamie Ducharme’s hands. Ducharme brings the best skills of journalist and lyricist to tell an exceedingly important story—and to tell it irresistibly."
—Jeffrey Kluger, bestselling co-author of Apollo 13 and author of Apollo 8

"The rise and fall of Juul is an instructive tale, and Jamie Ducharme does an excellent job detailing how one bad decision after another led the company astray in this deft rendition of grand start-up dreams gone up in smoke."
—Reeves Wiedeman, author of Billion Dollar Loser

"Combining meticulous research with gripping storytelling, this is a must-read with important lessons for policymakers, CEOs, and public health professionals alike. As a physician, I witnessed firsthand the harmful impact of vaping on young people. Big Vape explains how this happened."
—Leana Wen, M.D. author of Lifelines: A Doctor's Journey in the Fight for Public Health

"Big Vape illuminates the direct threat to life when sharp, well-funded minds can harness addiction to pursue profit over health. As with the Theranos saga, Ducharme's urgent story shows that medical safety is the last place that venture capitalists should be aiming their wrecking balls.”
—Joseph Menn, author of All the Rave: The Rise and Fall of Shawn Fanning's Napster and co-author of The People vs. Big Tobacco