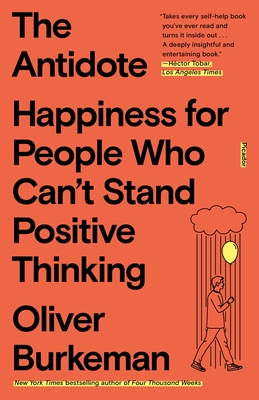 From the author of the New York Times-bestselling Four Thousand Weeks, a totally original approach to self-help: success through failure, calm through embracing anxiety.

Self-help books don't seem to work. Few of the many advantages of modern life seem capable of lifting our collective mood. Wealth—even if you can get it—doesn't necessarily lead to happiness. Romance, family life, and work often bring as much stress as joy. We can't even agree on what "happiness" means. So are we engaged in a futile pursuit? Or are we just going about it the wrong way?

Looking both east and west, in bulletins from the past and from far afield, Oliver Burkeman introduces us to an unusual group of people who share a single, surprising way of thinking about life. Whether experimental psychologists, terrorism experts, Buddhists, hardheaded business consultants, Greek philosophers, or modern-day gurus, they argue that in our personal lives, and in society at large, it's our constant effort to be happy that is making us miserable. And that there is an alternative path to happiness and success that involves embracing failure, pessimism, insecurity, and uncertainty—the very things we spend our lives trying to avoid.

Thought-provoking, counterintuitive, and ultimately uplifting, The Antidote is the intelligent person's guide to understanding the much-misunderstood idea of happiness.

Oliver Burkeman is a feature writer for The Guardian. He is a winner of the Foreign Press Association's Young Journalist of the Year Award and has been short-listed for the Orwell Prize. He wrote a popular weekly column on psychology, "This Column Will Change Your Life," and has reported from New York, London, and Washington, D.C. His books include Four Thousand Weeks: Time Management for Mortals and The Antidote: Happiness for People who Can’t Stand Positive Thinking. He lives in New York City.

“Burkeman's tour of the ‘negative path' to happiness makes for a deeply insightful and entertaining book. This insecure, anxious and sometimes unhappy reader found it quite helpful.” —Hector Tobar, The Los Angeles Times

“Some of the most truthful and useful words on [happiness] to be published in recent years . . . A marvellous synthesis of good sense, which would make a bracing detox for the self-help junkie.” —Julian Baggini, The Guardian

“The Antidote is a gem. Countering a self-help tradition in which ‘positive thinking' too often takes the place of actual thinking, Oliver Burkeman returns our attention to several of philosophy's deeper traditions and does so with a light hand and a wry sense of humor. You'll come away from this book enriched--and, yes, even a little happier.” —Daniel H. Pink, author of Drive and A Whole New Mind

“What unites [Burkeman's] travels, and seems to drive the various characters he meets, from modern-day Stoics to business consultants, is disillusionment with a patently false idea that something as complex as the goal of human happiness can be found by looking in a book . . . It's a simple idea, but an exhilarating and satisfying one.” —Alexander Larman, The Observer

“This is an excellent book; Burkeman makes us see that our current approach, in which we want happiness but search for certainty--often in the shape of material goods--is counterproductive.” —William Leith, The Telegraph

“Fascinating . . . After years spent consulting specialists--from psychologists to philosophers and even Buddhists--Burkeman realised they all agreed on one thing: . . . in order to be truly happy, we might actually need to be willing to experience more negative emotions--or, at least, to learn to stop running so hard from them.” —Mandy Francis, The Daily Mail