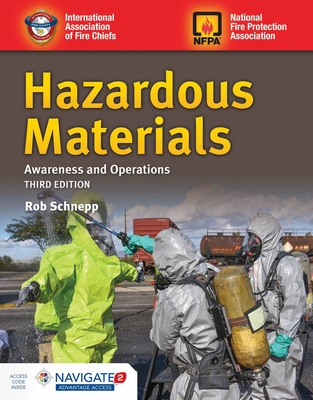 
Special Order—Subject to Availability
A fire fighter's ability to recognize an incident involving hazardous materials or weapons of mass destruction (WMD) is critical. They must possess the knowledge required to identify the presence of hazardous materials and WMD, and have an understanding of what their role is within the response plan. The Third Edition of Hazardous Materials Awareness and Operations will provide fire fighters and first responders with these skills and enable them to keep themselves and others safe while mitigating these potentially deadly incidents. Hazardous Materials Awareness and Operations, Third Edition has been completely updated and correlated to meet and exceed the competencies in the newly released 2017 Edition of NFPA 1072: Standard for Hazardous Materials/Weapons of Mass Destruction Emergency Response Personnel Professional Qualifications. A detailed crosswalk has also been developed to help you correlate the JPR's from the 2018 Edition of NFPA 472: Standard for Competence of Responders to Hazardous Materials/Weapons of Mass Destruction Incidents which can be found as an appendix. The structure of the Third Edition has also been enhanced to accommodate your exact needs with three distinct sections: The Awareness section encompasses two chapters for awareness level personnel The Operations section covers five chapters for operational responders The Mission Specific section concludes with eight chapters.