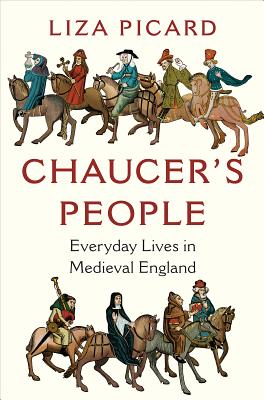 The Middle Ages re-created through the cast of pilgrims in The Canterbury Tales.

Among the surviving records of fourteenth-century England, Geoffrey Chaucer’s poetry is the most vivid. Chaucer wrote about everyday people outside the walls of the English court—men and women who spent days at the pedal of a loom, or maintaining the ledgers of an estate, or on the high seas. In Chaucer’s People, Liza Picard transforms The Canterbury Tales into a masterful guide for a gloriously detailed tour of medieval England, from the mills and farms of a manor house to the lending houses and Inns of Court in London.

In Chaucer’s People we meet again the motley crew of pilgrims on the road to Canterbury. Drawing on a range of historical records such as the Magna Carta, The Book of Margery Kempe, and Cookery in English, Picard puts Chaucer’s characters into historical context and mines them for insights into what people ate, wore, read, and thought in the Middle Ages. What can the Miller, “big…of brawn and eke of bones” tell us about farming in fourteenth-century England? What do we learn of medieval diets and cooking methods from the Cook? With boundless curiosity and wit, Picard re-creates the religious, political, and financial institutions and customs that gave order to these lives.

Liza Picard is the author of a series of books on the history of London: Elizabeth’s London, Restoration London, Dr. Johnson’s London, and Victorian London. She graduated with a law degree from the London School of Economics and was called to the bar by Gray’s Inn. She lives in London.
If you were to reread The Canterbury Tales, you’d get so much more from it with this at your side.

Liza Picard…weaves an infinity of small details into an arresting tapestry of life in 14th-century England. Her technique—pursued with the verve and spirit for which she is already justly admired—is to celebrate Chaucer’s pilgrim portraits by resituating them within an enlarged field of medieval practices and assumptions…[A]n enthusiast enacting her respect for Chaucer’s enduring and indelible accomplishment.
— Spectator

Chaucer's People is a holiday in the complex, joyful, indelicate medieval world—an approachable, engaging and highly recommended account of an England which is long gone, but whose spirit lingers.

This fast-paced, entertaining overview will appeal to students and fans of medieval history.
— Booklist