A Splendid Intelligence: The Life of Elizabeth Hardwick (Hardcover) 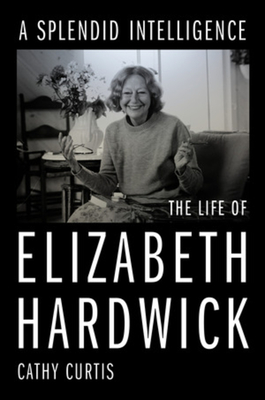 A Splendid Intelligence: The Life of Elizabeth Hardwick (Hardcover)

Born in Kentucky, Elizabeth Hardwick left for New York City on a Greyhound bus in 1939 and quickly made a name for herself as a formidable member of the intellectual elite. Her eventful life included stretches of dire poverty, romantic escapades, and dustups with authors she eviscerated in The New York Review of Books, of which she was a cofounder. She formed lasting friendships with literary notables—including Mary McCarthy, Adrienne Rich, and Susan Sontag—who appreciated her sharp wit and relish for gossip, progressive politics, and great literature.

Hardwick’s life and writing were shaped by a turbulent marriage to the poet Robert Lowell, whom she adored, standing by faithfully through his episodes of bipolar illness. Lowell’s decision to publish excerpts from her private letters in The Dolphin greatly distressed Hardwick and ignited a major literary controversy. Hardwick emerged from the scandal with the clarity and wisdom that illuminate her brilliant work—most notably Sleepless Nights, a daring, lyrical, and keenly perceptive collage of reflections and glimpses of people encountered as they stumble through lives of deprivation or privilege.

A Splendid Intelligence finally gives Hardwick her due as one of the great postwar cultural critics. Ranging over a broad territory—from the depiction of women in classic novels to the civil rights movement, from theater in New York to life in Brazil, Kentucky, and Maine—Hardwick’s essays remain strikingly original, fiercely opinionated, and exquisitely wrought. In this lively and illuminating biography, Cathy Curtis offers an intimate portrait of an exceptional woman who vigorously forged her own identity on and off the page.

Cathy Curtis is a former Los Angeles Times staff writer and past president of Biographers International Organization. A graduate of Smith College with a master’s degree in art history from the University of California, Berkeley, she is also the author of Restless Ambition: Grace Hartigan, Painter; Alive Still: Nell Blaine, American Painter; and A Generous Vision: The Creative Life of Elaine de Kooning. She lives in California.
Curtis treats Hardwick’s work with respect and admiration... I finished this book with a strong sense of Hardwick’s resolve and intelligence.
— Heather Clark - New York Times Book Review

A Splendid Intelligence is an admirable work that fills a glaring void in the 20th century American literary landscape... It’s a necessary and welcome biography, raising larger questions about literary influence and biography’s role in literary prestige.

It’s refreshing to read a history of Hardwick that lasts more than a few paragraphs and pictures her solo... The years chronicled in Curtis’s book are, as they always will be, dominated by Lowell, but documented here is her persistence in the marriage, her teaching, her criticism, her book publications, her literary accomplishments.

Towards the end, Hardwick observed that ‘Writing is so hard... It's the only time in your life when you have to think.’ She kept at it, excelled and endured, and this book does that effort justice.
— Mary Ann Gwinn - Minneapolis Star Tribune

As a biographer, Curtis is sober, respectful, diligent... A Splendid Intelligence is the first biography of a writer who is mainly known among the other writers who revere her, serving as a solid resource and accessible introduction.

A Splendid Intelligence is admirably researched and supplies the reader with a thorough account of Hardwick’s calendar life, complete with names, dates, places, publication summaries, and—most important—a remarkably well-organized portrait of the chaos that dogged the Lowell-Hardwick marriage.

Curtis recounts in resonant detail Hardwick’s demanding life in New York, Europe, and Maine, charting each phase in her passionately intellectual and artistic life, and adeptly lacing her involving and invaluable chronicle with exquisite passages from her subject’s letters and published works, ensuring that Hardwick’s etched crystal voice radiates in all its resplendent beauty, valor, and knowingness.
— Booklist (starred review)

Elizabeth Hardwick was a complex woman who disguised her rapier intelligence and acid wit under a ladylike Southern drawl. Born in Lexington, Kentucky, the eighth of eleven children, she somehow developed a bookish, elegant sensibility that would eventually bring her to New York City and into the bright, hot, competitive center of the literary world, where she became a writer of distilled and glistening essays and novels. Cathy Curtis has written a complex, nuanced, and deeply perceptive portrait of a woman who eschewed the de rigueur political positions of feminism that characterized her time but all the same spoke from a deeply independent-minded vision of women’s place in the world. Too often viewed as an appendage to Lowell and a minor figure on the literary stage, Curtis has given Hardwick the stature, humanity, and writerly amplitude she deserves.
— Daphne Merkin, author of The Fame Lunches

Cathy Curtis’s sympathetic yet clear-eyed portrait of Elizabeth Hardwick’s brilliant mess of a life is a revelation. A southerner with literary ambitions who transplanted herself to Manhattan, Hardwick married the poet Robert Lowell, whose bipolar disorder led to recurrent institutionalizations that were often precipitated by affairs with other women. Against these odds, Hardwick forged a consequential career as a story writer, novelist, and peerless essayist and critic. A vivid and at times harrowing book, A Splendid Intelligence is, in the end, a triumphant biography.

Cathy Curtis’s crisp, illuminating biography of Hardwick reveals her subject as one of a handful of brilliant women who shaped mid-twentieth-century American literature and feminism. The biography’s title, A Splendid Intelligence, encapsulates Curtis’s view of Hardwick as a writer whose fortitude, bold thinking, and tough lyricism earned her a permanent place in cultural history.

— Carol Sklenicka, author of Alice Adams: Portrait of a Writer and Raymond Carver: A Writer’s Life

Cathy Curtis has given us a stirring biography of Elizabeth Hardwick, who is still woefully underestimated as a humane Southern writer and unsparing New York intellectual, the author of a fictional masterpiece, Sleepless Nights, and some of the finest essays ever written about American literature. It’s a thrill to read this splendidly intelligent book.