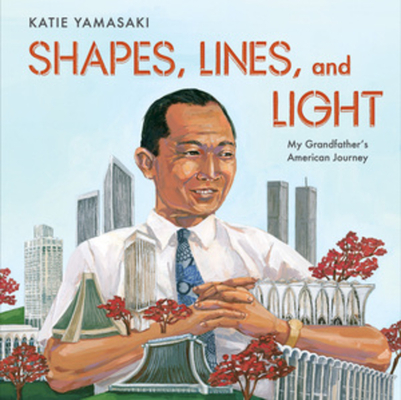 Minoru Yamasaki described the feeling he sought to create in his buildings as “serenity, surprise, and delight.” Here, Katie Yamasaki charts his life and work: his childhood in Seattle’s Japanese immigrant community, paying his way through college working in Alaska’s notorious salmon canneries, his success in architectural school, and the transformative structures he imagined and built. A Japanese American man who faced brutal anti-Asian racism in post–World War II America and an outsider to the architectural establishment, he nonetheless left his mark on the world, from the American Midwest to New York City, Asia, and the Middle East.

This striking picture book renders one artist’s work through the eyes of another, and tells a story of a man whose vision, hard work, and humanity led him to the pinnacle of his field.

Katie Yamasaki works primarily as a muralist and picture book creator. She has painted more than 80 murals round the world, and her most recent book is Dad Bakes. She lives in Brooklyn, New York, with her husband and their daughter.
An apt tribute to an iconic architect.
— Booklist

An American story of beating the odds and overcoming bigotry to create something greater than oneself. Inspiring.
— Kirkus Reviews

Yamasaki creates a loving portrait of her grandfather that emphasizes family and perseverance in equal measure.
— School Library Journal