The Far Side of the World (Aubrey/Maturin Novels #10) (Paperback) 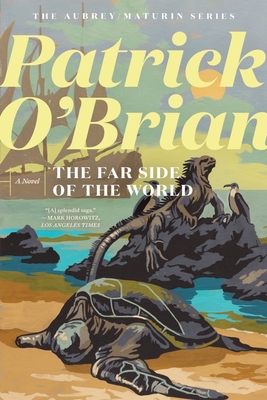 The Far Side of the World (Aubrey/Maturin Novels #10) (Paperback)

This is book number 10 in the Aubrey/Maturin Novels series.

The tenth installment in the beloved, epic Aubrey/Maturin series and inspiration for the major motion picture starring Russell Crowe.

The War of 1812 continues, and Captain Jack Aubrey sets course for Cape Horn on a mission after his own heart: intercepting a powerful American frigate outward bound to wreak havoc with the British whaling trade. Meanwhile, Stephen Maturin has a mission of his own in the world of secret intelligence and comes face to face with the harsh realities for women of the age. Disaster in various guises awaits them in the Great South Sea and in the far reaches of the Pacific—typhoons, castaways, shipwrecks, an ill-fated affair, murder, and criminal insanity—as well as a bold rescue by a crew of seafaring female warriors.

One of our greatest contemporary novelists, Patrick O’Brian is the author of the twenty volumes of the best-selling Aubrey/Maturin series, as well as many other books, including Testimonies, The Golden Ocean, The Unknown Shore, and biographies of Joseph Banks and Picasso.
One does not get many pages into the Aubrey-Maturin sequence before falling under the spell of O’Brian’s prose, which is coiling and uncoiling, spare, elegantly paced, quietly witty.
— Katherine A. Powers - Atlantic Monthly

Although O’Brian is ingenious at devising new adventures, it is the richness of his characters which justifies his reader’s continuing enthusiasm. . . . O’Brian acknowledges Jane Austen as one of his inspirations, and she need not be ashamed of the affiliation.
— The New Yorker