Atoms and Ashes: A Global History of Nuclear Disasters (Hardcover) 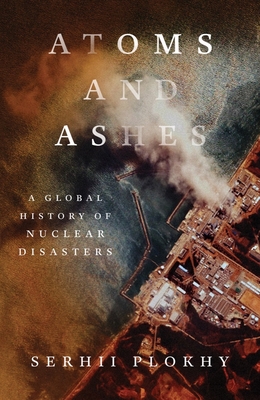 Atoms and Ashes: A Global History of Nuclear Disasters (Hardcover)

A chilling account of more than half a century of nuclear catastrophes, by the author of the “definitive” (Economist) Cold War history, Nuclear Folly.

Almost 145,000 Americans fled their homes in and around Harrisburg, Pennsylvania, in late March 1979, hoping to save themselves from an invisible enemy: radiation. The reactor at the nearby Three Mile Island nuclear power plant had gone into partial meltdown, and scientists feared an explosion that could spread radiation throughout the eastern United States. Thankfully, the explosion never took place—but the accident left deep scars in the American psyche, all but ending the nation’s love affair with nuclear power.

In Atoms and Ashes, Serhii Plokhy recounts the dramatic history of Three Mile Island and five more accidents that that have dogged the nuclear industry in its military and civil incarnations: the disastrous fallout caused by the testing of the hydrogen bomb in the Bikini Atoll in 1954; the Kyshtym nuclear disaster in the USSR, which polluted a good part of the Urals; the Windscale fire, the worst nuclear accident in the UK’s history; back to the USSR with Chernobyl, the result of a flawed reactor design leading to the exodus of 350,000 people; and, most recently, Fukushima in Japan, triggered by an earthquake and a tsunami, a disaster on a par with Chernobyl and whose clean-up will not take place in our lifetime.

Through the stories of these six terrifying incidents, Plokhy explores the risks of nuclear power, both for military and peaceful purposes, while offering a vivid account of how individuals and governments make decisions under extraordinary circumstances. Today, there are 440 nuclear reactors operating throughout the world, with nuclear power providing 10 percent of global electricity. Yet as the world seeks to reduce carbon emissions to combat climate change, the question arises: Just how safe is nuclear energy?

Serhii Plokhy, Mykhailo S. Hrushevs'kyi Professor of Ukrainian History and director of the Ukrainian Research Institute at Harvard University, is a leading authority on the history of the Cold War. He is the author of Atoms and Ashes: A Global History of Nuclear Disasters and Nuclear Folly: A History of the Cuban Missile Crisis, among many other works. He lives in Burlington, Massachusetts.
Frightening.... With catastrophic climate change bearing down on us, nuclear power has been promoted by some as an obvious solution, but this sobering history urges us to look hard at that bargain for what it is.
— Jennifer Szalai - New York Times

[An] enthralling study of the atomic age and its perils.... A meticulously researched history ... [and] also a timely read.
— Lawrence Freedman - Financial Times

Absolutely stunning. Atoms and Ashes is a formidable achievement. The prolific Serhii Plokhy has written a six-part historical thriller that is essential reading for both our politicians and the ordinary citizen. We have survived the Nuclear Age for three-quarters of a century, but this book calmly reminds us that accidents happen—and will surely happen again. Plokhy’s stories of nuclear accidents are riveting and frightening.

— Kai Bird, director of the Leon Levy Center for Biography and coauthor of the Pulitzer Prize–winning American Prometheus: The Triumph and Tragedy of J. Robert Oppenheimer

While considering the possible future of nuclear power, Plokhy ... reviews lessons learned from the most serious nuclear disasters since the end of WWII.... [He] asks whether nuclear energy is a viable path forward, considering all the risks.
— Booklist, starred review

Stunning.... Plokhy lucidly explains complex scientific and technical procedures and draws sharp profiles of key players in each episode. This well-informed study strikes a note of caution about the nuclear future.
— Publishers Weekly