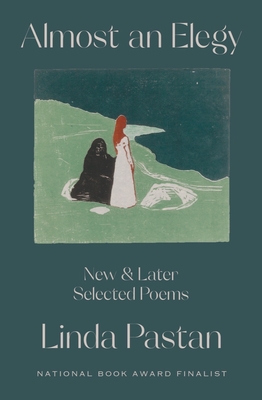 A moving and incandescent volume from a poet celebrated for her “unfailing mastery of her medium” (New York Times Book Review).

In poems of graceful lyricism and penetrating observation, award-winning poet Linda Pastan sheds new light on the complexities of ordinary life and the rising tide of mortality. Drawing from Pastan’s five most recent volumes and including over thirty new poems, Almost an Elegy reflects on beauty, old age, and the probability of loss.

With signature precision and quiet power, selections from The Last Uncle (2002) and Queen of a Rainy Country (2006) explore childhood, love, landscape, and the many pleasures of the imagination. Poems from Insomnia (2015) and Traveling Light (2011) chime with similar themes of aging, memory, and language. The new poems offer a profound portrait of a poet contemplating her life and the endurance of art, amidst the fleeting beauty of nature and the everyday losses that accompany old age. In “The Collected Poems,” Pastan writes, “For years I wrestled / with syllables, with silence.” Now, after a long and celebrated career, the poet rests “in a hammock of words, waiting / for the sun to rise again / over the horizon of the page.”

Whether in a lush evocation of an impressionist painting or a wry and wistful ode to a car key, Pastan finds lucid meaning in the passage of time.

Linda Pastan is the author of fifteen volumes of poems, most recently A Dog Runs Through It. A two-time National Book Award finalist, her many honors include the Maurice English Award and the 2003 Ruth Lilly Poetry Prize. Her poems have been translated into eight languages. The former poet laureate of Maryland, Pastan lives in Chevy Chase, Maryland.