The Life She Wished to Live: A Biography of Marjorie Kinnan Rawlings, author of The Yearling (Paperback) 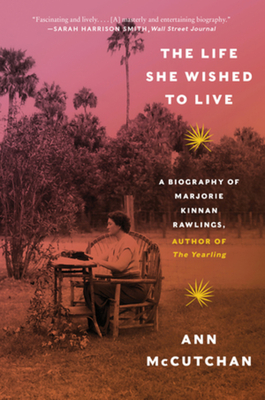 The Life She Wished to Live: A Biography of Marjorie Kinnan Rawlings, author of The Yearling (Paperback)

A comprehensive and engaging biography of Marjorie Kinnan Rawlings, Pulitzer Prize–winning author of the beloved classic The Yearling.

Washington, DC, born and Wisconsin educated, Marjorie Kinnan Rawlings was an unlikely author of a coming-of-age novel about a poor central Florida child and his pet fawn—much less one that has become synonymous with Florida literature writ large.

Rawlings was a tough, ambitious, and independent woman who refused the conventions of her early-twentieth-century upbringing. Determined to forge a literary career beyond those limitations, she found her voice in the remote, hardscrabble life of Cross Creek, Florida. There, Rawlings purchased a commercial orange grove and discovered a fascinating world out of which to write—and a dialect of the poor, swampland community that the literary world had yet to hear. She employed her sensitive eye, sharp ear for dialogue, and philosophical spirit to bring to life this unknown corner of America in vivid, tender detail, a feat that earned her the Pulitzer Prize in 1938. Her accomplishments came at a price: a failed first marriage, financial instability, a contentious libel suit, alcoholism, and physical and emotional upheaval.

With intimate access to Rawlings’s correspondence and revealing early writings, Ann McCutchan uncovers a larger-than-life woman who writes passionately and with verve, whose emotions change on a dime, and who drinks to excess, smokes, swears, and even occasionally joins in on an alligator hunt. The Life She Wished to Live paints a lively portrait of Rawlings, her contemporaries—including her legendary editor, Maxwell Perkins, and friends Zora Neale Hurston, Ernest Hemingway, and F. Scott Fitzgerald—and the Florida landscape and people that inspired her.

Ann McCutchan is the author of six works of biography and memoir. The founding director of the University of Wyoming’s MFA in creative writing program and former editor of American Literary Review, McCutchan grew up in Florida and now lives in Wyoming.
McCutchan is a sensitive observer of Rawlings’s work, and of her deeply unconventional life... It’s a pleasure to meet this cursing, hard-drinking, brilliant, self-destructive, car-wrecking, fun-loving, chain-smoking, alligator-hunting, moonshine-making, food-obsessed woman again on the page... Come to this biography for Rawlings’s outsize personality... Stay for the portrait of a woman whose writing meant everything to her.
— Dwight Garner - New York Times

[McCutchan] has a graceful style enlivened by glints of wry humor... The book re-creates the lush tropicality of north-central Florida in the 1930s and 1940s, before developers began to bulldoze over its natural wonders. And readers get a penetrating look at one driven writer's work process... [A] vivid portrait of a woman who gave her all to do her best work.
— Mary Ann Gwinn - Minneapolis Star Tribune

An engaging, lively biography of an accomplished and complicated woman... All of it adds up to a rich portrait of a woman who loved Florida, and of a Florida that’s now all but vanished.
— Colette Bancroft - Tampa Bay Times

Rawlings cleared her path through life as though armed with a machete; McCutchan, gracefully, records every chop.
— Jonathan Miles - Garden & Gun

Absorbing, affectionate, and long overdue... McCutchan looks closely at Rawlings’ letters, stories, novels and memoirs and mines the ways they reveal Rawlings’ writerly mind... The Life She Wished to Live is the biography that Rawlings has long deserved.

It’s been a quarter of a century since we’ve had a new biography of Marjorie Kinnan Rawlings, and Ann McCutchan delivers. From Rawlings’s early newspaper days to the triumph of The Yearling, McCutchan shows us a writer of complexity, ambition, and conviction. A deeply researched and satisfying read.

In Ann McCutchan’s welcome biography, we follow Marjorie Kinnan Rawlings’s evolution as a writer, glimpse her friendships with writers as various as Ernest Hemingway, Robert Frost, Margaret Mitchell and Zora Neale Hurston, and witness her vibrant literary life. Most striking is the fascinating account, unearthed from letters, of Rawlings’ personal struggle against what we would now call racist consciousness and her evolution as an ally of early 20th century struggles for social justice.
— Honor Moore, author of Our Revolution

How many contradictions can one life contain? Marjorie Kinnan Rawlings bridged the world of alligator hunting/orange growing/racially segregated early 20th century Florida and the world of legendary writers and elite New York-based editors. Ann McCutchan’s richly researched biography of the Pulitzer prize-winning author vividly portrays the uncompromising, hard-drinking and versatile Rawlings, who was equally at home wading through swamps as she was writing a novel or a cookbook, or conversing with F. Scott Fitzgerald, Zora Neale Hurston and Robert Frost. The complexities of Rawlings’ massive inner insecurities and her outward, outsized personality make for a compelling and thoughtful biography.
— Julie Dobrow, author of After Emily