Tales from the Ant World (Paperback) 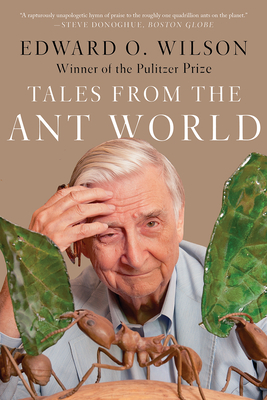 Tales from the Ant World (Paperback)

“In Mr. Wilson ants have found not only their Darwin but also their Homer.” —Economist

In Tales from the Ant World, two-time Pulitzer Prize winner Edward O. Wilson takes us on a thrilling myrmecological tour across continents and through time, inviting us into his decades-long scientific obsession with ants. Animating his observations with personal stories, Wilson hones in on twenty-five ant species to explain how these creatures talk, smell, taste, and crucially, how they fight to determine dominance. Richly illustrated throughout with depictions of ant species and photos from Wilson’s own expeditions, Tales from the Ant World is a fascinating personal account from one of our greatest scientists—and a necessary volume for any lover of the natural world.

Edward O. Wilson (1929-2021) was the author of more than thirty books, including Anthill, Letters to a Young Scientist, and The Conquest of Nature. The winner of two Pulitzer Prizes, Wilson was a professor emeritus at Harvard University and lived with his wife in Lexington, Massachusetts.