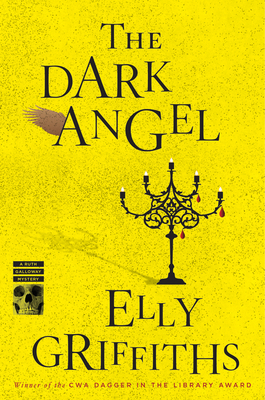 This is book number 10 in the Ruth Galloway Mysteries series.

In this highly atmospheric mystery, Ruth Galloway—whom #1 New York Times bestselling author Louise Penny calls “a captivating amateur sleuth”—has her summer vacation disrupted by a murder in a medieval Italian town where dark secrets are buried as deep as bones. When archaeologist Angelo Morelli asks Ruth Galloway to come to the Italian countryside to help identify bones found in picturesque Fontana Liri, she jumps at the chance to go—and brings her daughter along for what she assumes will be a working vacation. Upon arriving, Ruth hears murmurs of Fontana Liri’s strong resistance movement during World War II, and begins to sense that the townspeople are harboring an age-old secret. But how, if at all, could this chapter in history be connected to the human remains that Angelo has unearthed? Just as she’s getting her footing in the dig, DCI Nelson appears, unexpectedly and for no clear reason. When Ruth’s findings lead her and her crew to a modern-day murder, their holiday turns into anything but as they race to find out what darkness is lurking in this seemingly peaceful place. . .and who may be on their trail.
ELLY GRIFFITHS is the author of the Ruth Galloway and Brighton mystery series, as well as the standalone novels The Stranger Diaries, winner of the Edgar Award for Best Novel, and The Postscript Murders. She is the recipient of the CWA Dagger in the Library Award and the Mary Higgins Clark Award. She lives in Brighton, England.

PRAISE FOR THE DARK ANGEL   "Griffiths deftly balances the plotlines at home and abroad to deliver another hugely satisfying and entertaining Galloway mystery full of atmosphere and loose ends...this tenth addition to the series (after The Chalk Pit) is one of the best! The story lines are confidently interwoven, the Italian scenery is vividly drawn, and Ruth and Nelson’s relationship becomes yet more complicated, leaving readers eager for the next installment." —Library Journal  “Rich details about the Italian countryside, gastronomy, and history.”  —Publishers Weekly   "There is a charming old-home-week feel to this Italian adventure. The humor is well placed, as are the insightful forays into Italy’s history and people, but the gripping ending leaves no doubt that this is, above all, a mystery...A sure bet for fans of strong-minded women and wry humor in the tradition of Rhys Bowen and M.C. Beaton" — Booklist, STARRED review   PRAISE FOR ELLY GRIFFITHS AND THE RUTH GALLOWAY SERIES   Winner of the Mary Higgins Clark Award  Winner of the CWA Dagger in the Library Award   "Galloway is an everywoman, smart, successful and a little bit unsure of herself. Readers will look forward to learning more about her." —USA Today   "Elly Griffiths draws us all the way back to prehistoric times…Highly atmospheric." —The New York Times Book Review   "Forensic archeologist and academic Ruth Galloway is a captivating amateur sleuth-an inspired creation. I identified with her insecurities and struggles, and cheered her on. " —Louise Penny, author of the bestselling Armand Gamache series   "These books are must-reads." —Deborah Crombie, author of the Duncan Kincaid/Gemma James series   "[Ruth Galloway's] an uncommon, down-to-earth heroine whose acute insight, wry humor, and depth of feeling make her a thoroughly engaging companion." —Erin Hart, Agatha and Anthony Award nominated author of Haunted Ground and Lake of Sorrows   "Ruth Galloway is a remarkable, delightful character…A must-read for fans of crime and mystery fiction." —Associated Press   "Rich in atmosphere and history and blessed by [Griffith's] continuing development of brilliant, feisty, independent Ruth...A Room Full of Bones, like its predecessors, works its magic on the reader's imagination." —Richmond Times-Dispatch   "Lovers of well-written and intelligent traditional mysteries will welcome [Griffith's] fourth book…A Room Full of Bones is a clever blend of history and mystery with more than enough forensic details to attract the more attentive reader." —Denver Post —