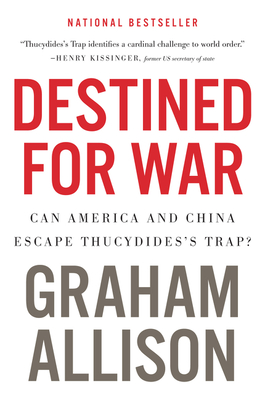 
On Our Shelves Now at:
NATIONAL BESTSELLER | NEW YORK TIMES NOTABLE BOOK OF THE YEAR. From an eminent international security scholar, an urgent examination of the conditions that could produce a catastrophic conflict between the United States and China—and how it might be prevented.

China and the United States are heading toward a war neither wants. The reason is Thucydides’s Trap: when a rising power threatens to displace a ruling one, violence is the likeliest result. Over the past five hundred years, these conditions have occurred sixteen times; war broke out in twelve.

At the time of publication, an unstoppable China approached an immovable America, and both Xi Jinping and Donald Trump promised to make their countries “great again,” the seventeenth case was looking grim—it still is. A trade conflict, cyberattack, Korean crisis, or accident at sea could easily spark a major war.

In Destined for War, eminent Harvard scholar Graham Allison masterfully blends history and current events to explain the timeless machinery of Thucydides’s Trap—and to explore the painful steps that might prevent disaster today.

SHORT-LISTED FOR THE 2018 LIONEL GELBER PRIZE
NAMED A BEST BOOK OF THE YEAR BY: FINANCIAL TIMES * THE TIMES (LONDON)* AMAZON

“Allison is one of the keenest observers of international affairs around.” — President Joe Biden

“[A] must-read book in both Washington and Beijing.” — Boston Globe

“[Full of] wide-ranging, erudite case studies that span human history . . . [A] fine book.”— New York Times Book Review
GRAHAM ALLISON is director of Harvard Kennedy School's Belfer Center for Science and International Affairs and the best-selling author of LeeKuan Yew: The Grand Master's Insights on China, the United States, and the World; Nuclear Terrorism: The Ultimate Preventable Catastrophe; and Essence of Decision: Explaining the Cuban Missile Crisis. Founding dean of the Harvard Kennedy School, Dr. Allison has served as Assistant Secretary of Defense and advised the secretaries of defense under every president from Reagan to Obama. He lives in Belmont, Massachusetts.

A NATIONAL BESTSELLER  A NEW YORK TIMES NOTABLE BOOK OF THE YEAR  A NEW YORK TIMES EDITORS' CHOICE  A LONDON TIMES BOOK OF THE YEAR: POLITICS  A FINANCIAL TIMES BEST BOOK OF THE YEAR: POLITICS  AN AMAZON BEST HISTORY BOOK OF THE YEAR  SHORTLISTED FOR THE 2018 LIONEL GELBER PRIZE   “Thucydides’s Trap identifies a cardinal challenge to world order: the impact of a rising power on a ruling power. I read the book with great interest. I can only hope that the US-China relationship becomes the fifth case to resolve itself peacefully, rather than the 13th to result in war.” — HENRY KISSINGER, former United States Secretary of State   “Graham Allison is one of the keenest observers of international affairs around. He consistently brings his deep understanding of history’s currents to today’s most difficult challenges and makes our toughest foreign policy dilemmas accessible to experts and everyday citizens alike. That’s why I regularly sought his counsel both as a senator and as vice president. In Destined for War, Allison lays out one of the defining challenges of our time — managing the critical relationship between China and the United States.” — JOE BIDEN, former Vice President of the United States   “One of the most insightful and thought-provoking books I have ever read on the most important relationship in the world: the US and China. If Graham Allison is right — and I think he is —China and the US must heed the lessons in this superb study in order to build a strategic relationship that avoids a war which neither side would win.” — GENERAL (RET.) DAVID PETRAEUS, Chairman of the KKR Global Institute, former Director of the CIA, and former Commander of US Central Command   “The Chinese superpower has arrived. Could America's failure to grasp this reality pull the United States and China into war? [Destined for War] argue[s] persuasively that adjusting to this global power shift will require great skill on both sides if conflagration is to be avoided... [Destined for War is full of] wide-ranging, erudite cases studies that span human history... [A] fine book.” — NEW YORK TIMES BOOK REVIEW   “This summer’s must-read book in both Washington and Beijing.” — NIALL FERGUSON, BOSTON GLOBE    “Please read this book because it'll rattle you...[Allison is] a first-class academic with the instincts of a first-rate politician. He brings to the 'Thucydides Trap' an impressive sweep of history and geopolitical and military knowledge. Unlike some academics, he writes interestingly... Allison isn't a pessimist. He argues that with skillful statecraft and political sensitivity these two superpowers can avoid war.” — BLOOMBERG NEWS   “A brief but far-reaching book in which potted history is incisively deployed…Perhaps we can avoid war, Mr. Allison says, by negotiating a long peace with China.” — WALL STREET JOURNAL   “Allison raises critical issues with a sense of both drama and history. His prose should alarm serious American thinkers... and perhaps divert us from debates over backchannels to Russia, presidential tweets and the ghost wiretapping of Trump Towers. And if you want some serious strategic imagination, pay special attention to the last ten pages or so. Worth the read.” —MICHAEL HAYDEN, former Director of the CIA, in The Cipher Brief   “Can the US avoid confrontation with China? That is the geopolitical question of our age. In most cases, Thucydides was right: when a new power arises in the world, it results in a clash with the dominant power. This important —