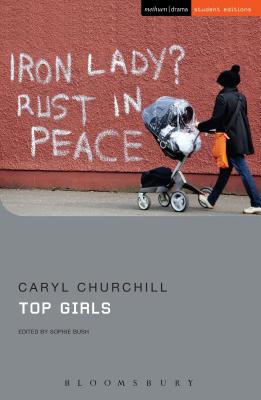 Marlene thinks the eighties are going to be stupendous. Her sister Joyce has her doubts. Her daughter Angie is just frightened.

Since its premiere in 1982, Top Girls has become a seminal play of the modern theatre. Set during a period of British politics dominated by the presence of the newly elected Prime Minister Margaret Thatcher, Churchill's play prompts us to question our notions of women's success and solidarity. Its sharp look at the society and politics of the 1980s is combined with a timeless examination of women's choices and restrictions regarding career and family.
This new Student Edition features an introduction by Sophie Bush, Senior Lecturer at Sheffield Hallam University, UK prepared with the contemporary student in mind. METHUEN DRAMA STUDENT EDITIONS are expertly annotated texts of a wide range of plays from the modern and classic repertoires. A well as the complete text of the play itself, this volume contains: - A chronology of the play and the playwright's life and work
- an introductory discussion of the social, political, cultural and economic context in which the play was originally conceived and created
- a succinct overview of the creation processes followed and subsequent performance history of the piece
- an analysis of, and commentary on, some of the major themes and specific issues addressed by the text
- a bibliography of suggested primary and secondary materials for further study.
Caryl Churchill is an award-winning playwright, whose plays are renowned for their striking influence upon contemporary British theatre practices. Indicative of her enduring impression upon the theatrical landscape, Churchill has won Obie Awards for her widely celebrated plays Cloud 9 (1979), Top Girls (1982), Serious Money (1987) and A Number (2002). Further cementing her reputation as an outstanding playwright, in 2002 Churchill won an Obie Award for Lifetime Achievement and in 2010 was placed in the American Theatre Hall of Fame. She continues to produce innovative and provocative work, such as Seven Jewish Children - a play for Gaza (2009) and Love and Information (2012), and in January 2016 her latest full-length play, Escaped Alone, opened at the Royal Court Theatre to great acclaim. With an illustrious theatre career that transcends four decades, Caryl Churchill is arguably more than just one of Britain's most revered female playwrights; she is one of Britain's most respected and groundbreaking working today. Sophie Bush is the Course Leader for the BA Performance for Stage and Screen on which she teaches across a range of modules designed to develop performance practice, research and study skills. Broadly speaking, her research and teaching interests lie in the history, practice and politics of contemporary British theatre. To date, her focus has been on the careers of female playwrights from the late 1970s to the present day. Her publications include The Theatre of Timberlake Wertenbaker (Bloomsbury Methuen Drama, 2013); My Mother Said I Never Should GCSE Student Edition (Bloomsbury Methuen Drama, 2016) and My Mother Said I Never Should GCSE Student Guide (Bloomsbury Methuen Drama, 2016).