Beyond Religion in India and Pakistan: Gender and Caste, Borders and Boundaries (Hardcover) 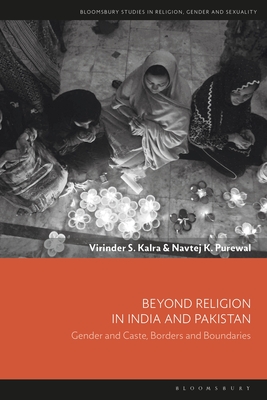 Beyond Religion in India and Pakistan: Gender and Caste, Borders and Boundaries (Hardcover)

Drawing on insights from theoretical engagements with borders and subalternity, Beyond Religion in India and Pakistan suggests new frameworks for understanding religious boundaries in South Asia. It looks at the ways in which social categories and structures constitute the bordering logics inherent within enactments of these boundaries, and positions hegemony and resistance through popular religion as an important indication of wider developments of political and social change. The book also shows how borders are continually being maintained through violence at national, community and individual levels.

By exploring selected sites and expressions of piety including shrines, texts, practices and movements, Virinder S. Kalra and Navtej K. Purewal argue that the popular religion of Punjab should neither be limited to a polarised picture between formal, institutional religion, nor the 'enchanted universe' of rituals, saints, shrines and village deities. Instead, the book presents a picture of 'religion' as a realm of movement, mobilization, resistance and power in which gender and caste are connate of what comes to be known as 'religious'. Through extensive ethnographic research, the authors explore the reality of the complex, dynamic and contested relations that characterize everyday material and religious lives on the ground. Ultimately, the book highlights how popular religion challenges the borders and boundaries of religious and communal categories, nationalism and theological frameworks while simultaneously reflecting gender/caste society.
Virinder S. Kalra is Professor of Sociology at the University of Warwick, UK. Navtej K. Purewal is Professor of Political Sociology and Development Studies at SOAS, University of London, UK.