Another Day's Begun: Thornton Wilder's Our Town in the 21st Century (Paperback) 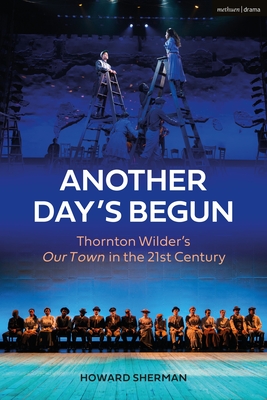 Another Day's Begun: Thornton Wilder's Our Town in the 21st Century (Paperback)

A work of startling originality when it debuted in 1938, Thornton Wilder's Our Town evolved to be seen by some as a vintage slice of early 20th Century Americana, rather than being fully appreciated for its complex and eternal themes and its deceptively simple form. This unique and timely book shines a light on the play's continued impact in the 21st century and makes a case for the healing powers of Wilder's text to a world confronting multiple crises. Through extensive interviews with more than 100 artists about their own experience of the play and its impact on them professionally and personally - and including background on the play's early years and its pervasiveness in American culture - Another Day's Begun shows why this particular work remains so important, essential, and beloved.

Every production of Our Town has a story to tell beyond Wilder's own. One year after the tragedy of 9/11, Paul Newman, in his final stage appearance, played the Stage Manager in Our Town on Broadway. Director David Cromer's 2008 Chicago interpretation would play in five more cities, ultimately becoming New York's longest-running Our Town ever. In 2013, incarcerated men at Sing Sing Correctional Facility brought Grover's Corners inside a maximum security prison. After the 2017 arena bombing in Manchester UK, the Royal Exchange Theatre chose Our Town as its offering to the stricken community. 80 years after it was written, more than 110 years after its actions take place, Our Town continues to assert itself as an essential play about how we must embrace and appreciate the value of life itself. Another Day's Begun explains how this American classic has the power to inspire, heal and endure in the modern day, onstage and beyond.
Howard Sherman is a theatre administrator, writer, and advocate. He has been executive director of the American Theatre Wing and the O'Neill Theater Center, managing director of Geva Theatre, general manager of Goodspeed Musicals and public relations director of Hartford Stage. He has also interim director of the Alliance for Inclusion in the Arts. Since 2012, he has been the US columnist for The Stage newspaper in London, and in 2018 was named Contributing Editor of Stage Directions magazine. His writing has appeared in a number of publications including Slate, The New York Times, the Guardian, and American Theatre Magazine. He was cited as one of the Top 40 Free Speech Defenders in 2014 by the National Coalition Against Censorship and received the Dramatists Legal Defense Fund's "Defender" Award in 2015; he frequently consults, writes and speaks on issues of censorship in both academic and professional theatre.