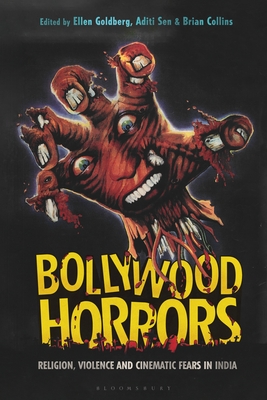 Bollywood Horrors is a wide-ranging collection that examines the religious aspects of horror imagery, representations of real-life horror in the movies, and the ways in which Hindi films have projected cinematic fears onto the screen.

Part one, "Material Cultures and Prehistories of Horror in South Asia" looks at horror movie posters and song booklets and the surprising role of religion in the importation of Gothic tropes into Indian films, told through the little-known story of Sir Devendra Prasad Varma. Part two, "Cinematic Horror, Iconography and Aesthetics" examines the stereotype of the tantric magician found in Indian literature beginning in the medieval period, cinematic representations of the myth of the fearsome goddess Durga's slaying of the Buffalo Demon, and the influence of epic mythology and Hollywood thrillers on the 2002 film Raaz. The final part, "Cultural Horror," analyzes elements of horror in Indian cinema's depiction of human trafficking, shifting gender roles, the rape-revenge cycle, and communal violence.
Ellen Goldberg is Associate Professor of South Asian Studies in the School of Religion at Queen's University, Canada. She is the author of The Lord Who Is Half Woman: Ardhanarisvara in Indian and Feminist Perspective (2002), and co-editor of Gurus of Modern Yoga (2014). Aditi Sen is Assistant Professor in the Department of History and the School of Religion, Queen's University, Canada. Brian Collins is the Drs. Ram and Sushila Gawande Chair in Indian Religion and Philosophy and Associate Professor of World Religions at Ohio University, USA. He is the author of The Head Beneath the Altar: Hindu Mythology and the Critique of Sacrifice (2014).