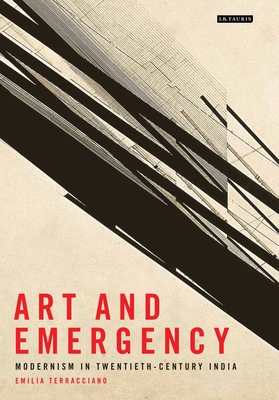 
Not On Our Shelves—Ships in 1-5 Days
During states of emergency, normal rules and rights are suspended, and force can often prevail. In these precarious intervals, when the human potential for violence can be released and rehearsed, images may also emerge. This book asks: what happens to art during a state of emergency? Investigating the uneasy relationship between aesthetics and political history, Emilia Terracciano traces a genealogy of modernism in colonial and postcolonial India; she explores catastrophic turning points in the history of twentieth-century India, via the art works which emerged from them. Art and Emergency reveals how the suspended, diagonal, fugitive lines of Nasreen Mohamedi's abstract compositions echo Partition's traumatic legacy; how the theatrical choreographies of Sunil Janah's photographs document desperate famine; and how Gaganendranath Tagore's lithographs respond to the wake of massacre. Making an innovative, important intervention into current debates on visual culture in South Asia, this book also furthers our understanding of the history of modernism.
Emilia Terracciano is the Leverhulme Early Career Research Fellow at the Ruskin School of Art, University of Oxford (2015-2018). Her research interest lies in contemporary photographic art practices with a focus on the visual cultures of the global south. Emilia has taught in various institutions including University College London, The Courtauld Institute of Art, The Sotheby's Institute of Art, The Photographer's Gallery, Christie's Education and FADA. Emilia's articles have appeared in Art Journal and Art Bulletin, as well as in the art press, including Frieze, Modern Painters, The Caravan and The Burlington Magazine. From 2008-2013, Emilia worked with the curatorial staff of the V&A Asian Department to catalogue the South Asia modern and contemporary collection, and acted as a consultant for the British Museum acquisition team.