Islam and the Governing of Muslims in France: Secularism Without Religion (Islam of the Global West) (Paperback) 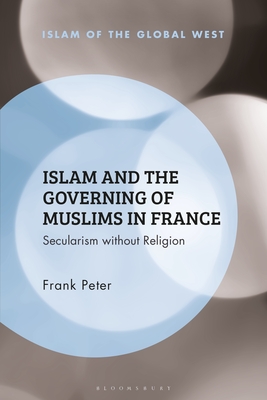 Islam and the Governing of Muslims in France: Secularism Without Religion (Islam of the Global West) (Paperback)

Will Islam be able to adapt to France's secularity and its strict separation of public and private spheres? Can France accommodate Muslims? In this book, Frank Peter argues that the debate about "Islam" and "Muslims" is not simply caused by ignorance or Islamophobia. Rather, it is an integral part of how secularism is reasoned.
Islam and the Governing of Muslims in France shows that understanding religion as separate from other aspects of life, such as politics, economy, and culture, disregards the ways religion has operated and been managed in "secular" societies such as France. This book uncovers the varying rationalities of the secular that have developed over the past few decades in France to "govern Islam," in order to examine how Muslims engage with the secular regime and contribute to its transformation.
This book offers a close analysis of French secularism as it has been debated by Islamic intellectuals and activists from the 1990s until the present. It will influence the study of secularism as well as the study of Islam in the French Republic, and reveal new connections between Islamic traditions and secular rationalities.