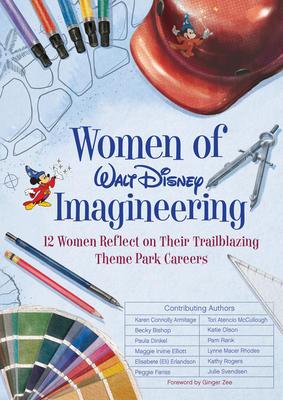 
Not On Our Shelves—Ships in 1-5 Days
A dozen female Imagineers recount their trailblazing careers!

Capturing an era—and preserving the stories they have told their daughters, their mentees, their husbands, and their friends—a dozen women Imagineers have written personal stories from their decades designing and building the Disney world-wide empire of theme parks. Illustrated with the women’s personal drawings and photos in addition to archival Imagineering images, the book represents a broad swath of Imagineering’s creative disciplines during a time of unprecedented expansion. Intertwined with memories of Disney legends are glimpses of what it takes behind the scenes to create a theme park, and the struggles unique to women who were becoming more and more important, visible and powerful in a workplace that was overwhelmingly male.

Each chapter is unique, from a unique Imagineer’s perspective and experience. These women spent their careers telling stories in three dimensions for the public. Now they’ve assembled their stories in print, with the hope that their experiences will continue to entertain and illuminate.
Maggie Elliott, senior vice president, Creative Development Administration; Eli Erlandson, principal concept architect; Peggie Fariss, executive, creative development; Paula Dinkel, principal lighting designer; Karen Connolly Armitage, Concept Designer; Katie Olson, Principal Color Concept Designer; Becky Bishop, area development executive; Pam Rank, principal show lighting designer; Lynne Macer Rhodes, producer; Kathy Rogers, executive show producer; Julie Svendsen, concept show designer; Tori Atencio McCullough, Director (interior design)
PRAISE FOR WOMEN OF WALT DISNEY IMAGINEERING
"I just finished reading the outstanding Women of Walt Disney Imagineering; I found it to be a compelling and truthful read from the perspective of a dozen very talented women, each bringing something unique to the table. The commonalities and differences in each writer's individual journey offers a colorful illustration of life in the workshops and offices. . . . Aside from describing the obvious challenges of being a woman in a male-dominated workforce, I can't recall when there's been a book that has given the reader such realistic insights into daily life at Walt Disney Imagineering, warts and all. I'm happy and proud to have known, worked with, and learned from these women Imagineers over the years. This book should be of interest to anyone in the industry or aspiring to be an Imagineer, regardless of gender. In my opinion it's one of the best peeks behind the curtain of Walt Disney Imagineering published so far."—Tom Morris, former Executive Creative Director, Walt Disney Imagineering

PRAISE FOR WOMEN OF WALT DISNEY IMAGINEERING
"My own career as an Imagineer covers approximately the same era reflected upon in Women of Walt Disney Imagineering. Many of the 12 authors I know well and have collaborated with during our long careers together. Like all Imagineers, they have stories to tell of adventure, inspiration, grit, hard work, and camaraderie, all of which one will find between the covers of this book. But as women, and as individuals with strong personal points of view, they bring another perspective to this important period of Imagineering history. This book delivers additional information and interpretation to stories we thought we already knew and does so through the very personal and honest anecdotes and opinions of its authors. . . . Women of Walt Disney Imagineering is a universal story of challenge, opportunity, setback, and triumph. We can all learn from that. But perhaps someone's daughter somewhere will learn a bit more, a bit more about the vision, persistence, courage, and zest for life that it will take for her to succeed in the world."—Joe Rohde, former Portfolio Executive, Walt Disney Imagineering

PRAISE FOR WOMEN OF WALT DISNEY IMAGINEERING
"This compilation of 12 short stories by women of Imagineering should be read by all who aspire to a career where achievement is respected and nurtured. Featuring their trials, confidence, perseverance and finally recognition, these women share their thoughts on how to succeed and believe in yourself. Valuable lessons and guidance for those who wish to enter a creative environment and have fun as well."—Frank Stanek, Chairman, Stanek Global Advisors, LLC