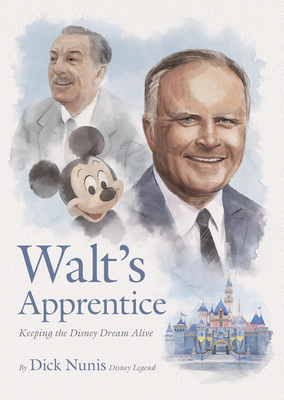 
Coming Soon—Pre-Order Now
Walt’s Apprentice: Keeping the Disney Dream Alive is the memoir of Disney Legend Dick Nunis. It is a warm personal reminiscence of learning directly from Walt Disney for 12 years, followed by more than 30 years devoted to championing his vision and standards as the Disney empire grew.

The story covers Disney’s highlights, including the 1960 Winter Olympics, 1964-1965 New York World’s Fair, and the development and opening of Disneyland, Walt Disney World, Epcot, Tokyo Disneyland and Disneyland Paris. Unlike other Disney books, this story is told from the perspective of operations rather than Imagineering. It touches on decisions that defined the guest experience and Disney’s reputation for quality in areas ranging from capacity and people-moving, training, delivering a consistent “good show,” food service, and more.This first-person narrative is presented as a series of wide-ranging vignettes. Some vignettes focus on personal, character-shaping events, such as the injury that ended his collegiate football career. Other stories touch on national events, such as Nikita Khrushchev’s derailed visit to Disneyland, the decision to close the park following the assassination of John F. Kennedy, and Ronald Reagan’s assistance in expediting the visa process for cast members staffing the Epcot World Showcase. Few people have enjoyed a life so immersed in Disney magic.

These stories share that magic through the memories of one of the original doers and dreamers.

Searching for that perfect gift for the #1 Disney fan in your life? Explore more behind-the-scenes stories from Disney Editions:
One Little Spark! Mickey's Ten Commandments and The Road to Imagineering (By Disney Legend Marty Sklar)
Magic Journey: My Fantastical Walt Disney Imagineering Career (By Kevin Rafferty)
Travels with Walt Disney: A Photographic Voyage Around the World (By Jeff Kurtti)
Eat Like Walt: The Wonderful World of Disney Food (By Marcy Carriker Smothers)
Walt Disney: An American Original (By Bob Thomas)

Dick Nunis was a cast member when the gates of Disneyland opened in 1955. For the next eleven years, he learned professional and personal lessons from his mentor Walt Disney, America’s greatest showman. This personal journey takes us through his remarkable forty-four-year career with The Walt Disney Company, beginning as an hourly cast member, and rising to Chairman of Walt Disney Parks and Resorts, where he nurtured and applied with unwavering dedication and tireless energy the lessons he learned alongside Walt Disney. Thanks to his contributions, Dick Nunis is a Disney Legend, and Walt’s Disney’s dream of creating “The Happiest Places on Earth” continues to delight each new generation of guests around the world.
This entertaining and instructive memoir appropriately mirrors a theme-park adventure. Nunis takes readers on a journey through the ups, downs, twists, and turns of his career at Disney. Structured as a series of short anecdotes followed by "lessons learned," Walt's Apprentice is effective as a professional model for reflection and improvement as well as a guide for changing with the times and endlessly striving for excellence. Crammed with gems such as "you can always make things better and if you can, you should," shared experiences reflect the thoughts of several Disney leaders in addition to Nunis, adding richness to the content. Any title providing a behind-the-scenes glimpse into the world of Disney is sure to be popular with a wide audience. This offering is worthy of that popularity based on both its engaging voice and valuable business insights. Recommended for business collections in all library types.—Val Edwards, Booklist