Chronicles of the Scotch-Irish Settlement in Virginia: Extracted From the Original Court Records of Augusta County, 1745-1800 (Paperback) 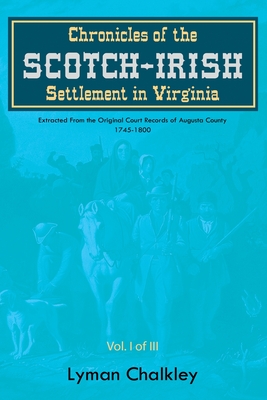 Chronicles of the Scotch-Irish Settlement in Virginia: Extracted From the Original Court Records of Augusta County, 1745-1800 (Paperback)

In the 17th century, impoverished but brave Scotch-Irish men and women migrated to seek greater opportunities in Virginia: This is their story.

There are many accounts written about the Scotch-Irish people who settled in Virginia in the 17th Century, but none as detailed and authentic as this. This work contains records of the first Scotch-Irish pioneers who first breached the mountain barrier sealing off the Atlantic seaboard from the country west of the Blue Ridge.

Chalkley describes the daily life, struggles, trails, achievement, failures, occupations, inventions, tools and the moral, spiritual or religious life of the early Scotch-Irish settlers in Virginia. He has also given us accurate genealogical records for the thousands of individuals who wish to trace back their ancestry to Augusta County and the Great Valley of Virginia.

In this book you will find; abstracts of court order books, original papers on suits, filed in 1745-1825 and petitions filed in court from 1745. You will also find records of military service that took place during the colonial wars and revolution, marriage bonds, land entries, tax delinquents and many more.

This book presents the Scotch-Irish history in its truest and most authentic form.