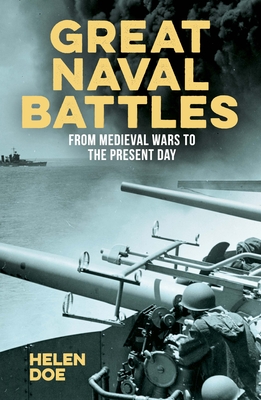 This fascinating and accessible account steers a course through the most epic engagements on the high seas over the last 800 years, written by the renowned naval historian Dr Helen Doe.

Charting a course from medieval to modern times, Great Naval Battles dissects over 50 key naval operations which have changed the course of history as ships evolved from wooden vessels powered by sail and oar to nuclear-powered submarines and aircraft carriers.

Arranged chronologically, the overview of each battle will describe where and why they took place, who was in command, the technologies and weapon systems available to them, and the battle tactics they used. Includes:
- Battle of Sandwich (1217) - the first battle known to be fought at sea under sail
- Battle of Gravelines (1588) - when the Spanish Armada was repelled by the English
- The Battle of Trafalgar (1805) - the victory that establish Britain's Royal Navy as the world's preeminent sea-power for the next hundred years and more
- The Battle of Hampton Roads - the first battle between ironclad warships, which took place in the American Civil War
- The Battle of Jutland (1916) - the largest naval engagement of the First World War
- The Battle of Midway (1942) - which turned the tide against the Japanese in the Pacific theater in World War II Featuring maps, photographs and illustrations, and a glossary of terms, this fascinating book charts the key role of naval warfare through this and explores how technology, leadership, luck, and even the weather, have played their part in defining the world we live in today.
Dr Helen Doe gained her PhD at the University of Exeter where she is a Fellow of the Centre for Maritime Historical Studies. Among her many publications are The First Atlantic Liner and Enterprising Women in Shipping. Together with Professor Richard Harding, she edited Naval Leadership and Management, 1650-1950. She is a member of the UK Government's Council of Experts on National Historic Ships (these include HMS Victory, the Mary Rose, Cutty Sark and Warrior). She is a Trustee of the SS Great Britain and Vice Chairman of the British Commission for Maritime History.