The Landmark Arrian: The Campaigns of Alexander (Landmark Series) (Paperback) 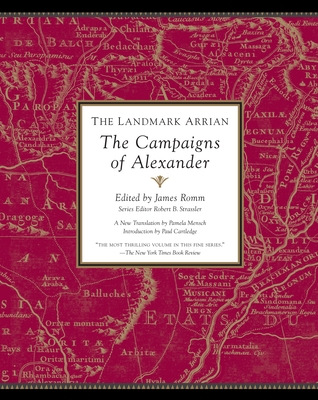 The Landmark Arrian: The Campaigns of Alexander (Landmark Series) (Paperback)

Arrian’s Campaigns of Alexander, widely considered the most authoritative history of the brilliant leader’s great conquests, is the latest addition to the acclaimed Landmark series.

After twelve years of hard-fought campaigns, Alexander the Great controlled a vast empire that was bordered by the Adriatic sea to the west and modern-day India to the east. Arrian, himself a military commander, combines his firsthand experience of battle with material from Ptolemy’s memoirs and other ancient sources to compose a singular portrait of Alexander. This vivid and engaging new translation of Arrian will fascinate readers who are interested in classical studies, the history of warfare, and the origins of East­–West tensions still swirling in Iran, Iraq and Afghanistan today. Enriched by the series’ trademark comprehensive maps, illustrations, and annotations, and with contributions from the preeminent classical scholars of today, The Landmark Arrian: The Campaigns of Alexander is the definitive edition of this essential work of ancient history.

James Romm is James H. Ottaway Jr. Professor of Classics at Bard College. He has received fellowships from the Guggenheim Foundation and the National Endowment for the Humanities. His books include The Edges of the Earth in Ancient Thought and the forthcoming Ghost on the Throne: The Death of Alexander the Great and the War for Crown and Empire.

Robert B. Strassler is an unaffiliated scholar who holds an honorary Doctorate of Humanities and Letters from Bard College and is chairman of the Aston Magna Foundation for Music and the Humanities. He lives in Brookline, Massachusetts.

“The most thrilling volume in this fine series.” —The New York Times Book Review

“A sumptuously annotated and lavishly illustrated new edition of The Campaigns of Alexander. . . . Arrian is by far our best and most reliable source for the events he describes.” —The Wall Street Journal

“Pamela Mensch’s new translation is both literal and fast-paced. . . . An ideal introductory text to the career of Alexander, [that] will introduce readers to an accessible ancient historian.” —The New Criterion

“Illuminating. . . . Alexander’s conquests stretched across the known world—this is the first edition of Arrian to show that world in all its vastness.” —The National


Praise for the Landmark Series

“Truly worthy of the series name. . . . Strassler and the other contributors bring Xenophon to life.” —Sacramento Book Review

“The most densely annotated, richly illustrated, and user-friendly edition of his Histories ever to appear.” —Daniel Mendelsohn, The New Yorker

“A real service. . . . Considerably improves accessibility by integrating hundreds of maps and extensive timelines . . . [and] amplifies the first historian’s own epic accomplishment.” —Forbes

“Without question, this is the finest edition of Thucydides’ history ever produced. It is a treasure.” —The Washington Times

“The editor and his contributors have asked themselves the fundamental question: how can one best present and interpret the work of one of the most fascinating but difficult of ancient authors to a modern audience? They have answered this question brilliantly.” —The Classical Quarterly