The Age of Entanglement: When Quantum Physics Was Reborn (Paperback) 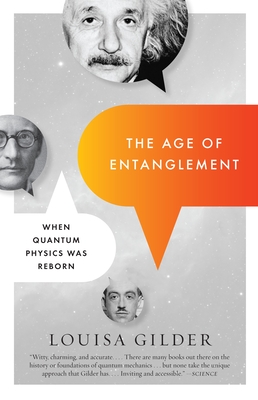 The Age of Entanglement: When Quantum Physics Was Reborn (Paperback)


Special Order—Subject to Availability
In The Age of Entanglement, Louisa Gilder brings to life one of the pivotal debates in twentieth century physics. In 1935, Albert Einstein famously showed that, according to the quantum theory, separated particles could act as if intimately connected–a phenomenon which he derisively described as “spooky action at a distance.” In that same year, Erwin Schrödinger christened this correlation “entanglement.” Yet its existence was mostly ignored until 1964, when the Irish physicist John Bell demonstrated just how strange this entanglement really was. Drawing on the papers, letters, and memoirs of the twentieth century’s greatest physicists, Gilder both humanizes and dramatizes the story by employing the scientists’ own words in imagined face-to-face dialogues. The result is a richly illuminating exploration of one of the most exciting concepts of quantum physics.
Louisa Gilder was born in Tyringham, Massachusetts, and graduated from Dartmouth College in 2000. This is her first book.
“Captivating. . . . A movingly human and surprisingly accessible picture of the unveiling of the quantum universe. . . . Admirably lucid.” —Chicago Tribune

“A sparkling, original book. . . . Gilder brings the reader into a mix of ideas and personalities handled with a verve reminiscent of Jeremy Berstein’s scientific portraits in The New Yorker. . . . What had been for generations a story of theoretical malcontents now intrigues spooks and start-ups. All this radiates from Louisa Gilder’s story. Quantum physics lives.” —The New York Times Book Review

“Highly entertaining. . . . Hard to put down. . . . Grippingly readable. . . . Gilder is a fine storyteller who brings to life one of the great scientific adventures of our time.” —American Scientist

“[A] fascinating yarn. . . . For anyone who wants to understand the human angle of modern physics and separate quirks from quarks, this is your book.” —The Providence Journal (A Best Book of 2008)

“A witty, charming, and accurate account of the history of that bugaboo of physics–quantum entanglement . . . There are many books out there on the history or foundations of quantum mechanics.  Some are more technical, others more historical, but none take the unique approach that Gilder has–to focus on the quantum weirdness of entanglement itself as her book’s unifying them and to present it in an inviting and accessible way . . . Delightful.” —Science

“Astonishing. . . . The courage and even audacity of a nonscientist to investigate the evolution of ideas about the most esoteric aspects of quantum physics are truly remarkable. . . . Gilder is a phenomenal writer.” —Charleston Post & Courier

“A welcome addition to the genre. . . . [Gilder’s] book really shines . . . [She] proves that the neglected last fifty years of quantum mechanics is . . . full of brilliant, quirky personalities and mind-bending discoveries. . . . She is a very compelling writer, and she clearly understands what makes science exciting and science history interesting.” —ScientificBlogging.com

“The clearest and most intriguing history of the manner in which the scientific method continues to advance knowledge. An amazing story.” —Sacramento News & Review

“A delightfully unconventional history. . . . Especially enjoyable are the portraits of the less famous physicists . . . Gilder has done her homework.” —Nature

“[Gilder] displays an ability to capture a personality in a few words.” —The Washington Post

“An admirable, unexpected book, historically sound and seamlessly constructed, that transports those of us who do not understand quantum mechanics into the lives and thoughts of those who did.” —George Dyson, author of Darwin Among the Machines

“Louisa Gilder disentangles the story of entanglement with such narrative panache, such poetic verve and such metaphorical precision that for a moment I almost thought I understood quantum mechanics.” —Matt Ridley, author of Genome