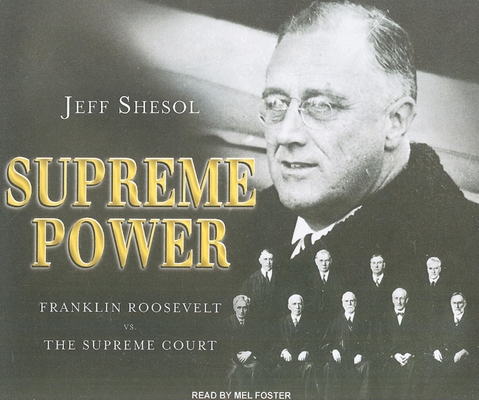 
Special Order—Subject to Availability
Beginning in 1935, in a series of devastating decisions, the Supreme Court's conservative majority left much of Franklin Roosevelt's agenda in ruins. The pillars of the New Deal fell in short succession. It was not just the New Deal but democracy itself that stood on trial. In February 1937, Roosevelt struck back with an audacious plan to expand the Court to fifteen justices-and to "pack" the new seats with liberals who shared his belief in a "living" Constitution. The ensuing fight was a firestorm that engulfed the White House, the Court, Congress, and the nation. The final verdict was a shock. It dealt FDR the biggest setback of his political life, split the Democratic party, and set the stage for a future era of Republican dominance. Yet the battle also transformed America's political and constitutional landscape, hastening the nation's march into the modern world. This brilliant work of history unfolds like a thriller, with vivid characters and unexpected twists. Providing new evidence and fresh insight, Jeff Shesol shows why understanding the Court fight is essential to understanding the presidency, personality, and legacy of FDR-and to understanding America at a crossroads in its history.
Jeff Shesol is a founding partner of West Wing Writers, a speechwriting and communications strategy firm, and a former speechwriter for President Bill Clinton. His book "Mutual Contempt" was a "New York Times" Notable Book and a "Washington Post" Critic's Choice.

Mel Foster has narrated over 150 audiobooks and has won several awards. Twice an Audie finalist for "1864: Lincoln at the Gates of History" by Charles Bracelen Flood and "Finding God in Unexpected Places" by Philip Yancey, he won for the latter title.

"Shesol is a terrific storyteller, and he brings the book's events to life by taking the [listener] inside the key places where the constitutional conflict took shape." ---The Boston Globe