Glory Road: My Story of the 1966 NCAA Basketball Championship and How One Team Triumphed Against the Odds and Changed America Forever (Paperback) 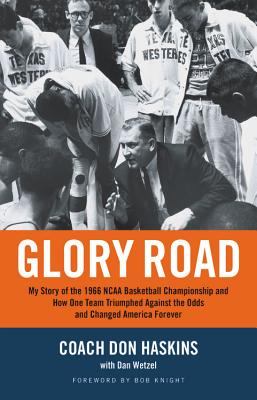 Glory Road: My Story of the 1966 NCAA Basketball Championship and How One Team Triumphed Against the Odds and Changed America Forever (Paperback)


Not On Our Shelves—Ships in 1-5 Days
Timed to the release of Jerry Bruckheimer's movie, the moving autobiography of Hall of Fame basketball coach Don Haskins and his storied team of players, the Texas Western Miners

In 1966, college basketball was almost completely segregated. In the championship game for the NCAA title that year, Don Haskins, coach of the then little-known Texas Western College, did something that had never been done before in the history of college basketball. He started five black players, and in the now legendary game, unseated the nationally top-ranked University of Kentucky. Broadcast on television throughout the country, the Miners victory became the impetus for the desegregation of all college teams in the South during the next few years.

Now, for the first time, Hall of Fame coach Don Haskins tell his story. Beginning as a small-town high school basketball coach, Haskins was known for his tough coaching methods and larger-than-life personality. As a child growing up during the Dust Bowl in Oklahoma, he developed a strong set of values and discipline that he would instill in his players throughout his coaching career. With recollections from his former players, including those of the 1966 team, along with Haskins's own Seven Principles for Success, Glory Road is the inspiring story of a living legend and one of the most respected coaches of all time.

With a foreword by basketball legend Bobby Knight, and coinciding with the release of the film Glory Road, the story of Don Haskins and his championship team is sure to become a classic for sports fans and historians.
Don Haskins was the head coach at Texas Western College (later renamed the University of Texas, El Paso), where he won 719 games, 14 Western Athletic Conference championships, and the 1966 national championship. He is a member of the Naismith Basketball Hall of Fame and lives in El Paso with his wife, Mary. Dan Wetzel is the award-winning national columnist for Yahoo! Sports and the coauthor of the critically acclaimed books Sole Influence and Runnin' Rebel. He lives in Berkley, Michigan, with his wife, Jan, and daughter, Allie.