The Map of Consciousness Explained: A Proven Energy Scale to Actualize Your Ultimate Potential (Paperback) 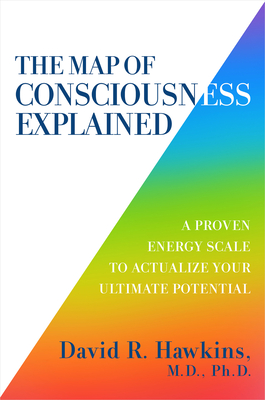 The Map of Consciousness Explained: A Proven Energy Scale to Actualize Your Ultimate Potential (Paperback)


Not On Our Shelves—Ships in 1-5 Days
An accessible exploration of best-selling author's most famous work, The Map of Consciousness, that helps readers experience healing and transcendence.

Using a unique muscle-testing method, Dr. David R. Hawkins conducted more than 250,000 calibrations during 20 years of research to define a range of values, attitudes, and emotions that correspond to levels of consciousness. This range of values-along with a logarithmic scale of 1 to 1,000-became the Map of Consciousness, which Dr. Hawkins first wrote about in his best-selling book, Power vs. Force.

With the Map, Dr. David R. Hawkins laid out the entire spectrum of consciousness, from the lower levels of Shame, Guilt, Apathy, Fear, Anger, and Pride; to Courage, Acceptance, and Reason; all the way up to the more expanded levels of Love, Ecstasy, Peace, and Enlightenment. These "higher" energy fields are a carrier wave of immense life energy.

An essential primer on the late Dr. David R. Hawkins's teachings on human consciousness and their associated energy fields, The Map of Consciousness Explained offers readers an introduction and deeper understanding
of the Map, with visual charts and practical applications to help them heal, recover, and evolve to higher levels of consciousness and energy.

This book is a light unto the path of any individual who wants to become more effective in any area of life.
David R. Hawkins, M.D., Ph.D., was Director of The Institute for Spiritual Research, Inc., and Founder of the Path of Devotional Nonduality. He was renowned as a pioneering researcher in the field of consciousness, as well as author, lecturer, clinician, physician, and scientist. He served as an advisor to Catholic, Protestant, and Buddhist monasteries; appeared on major network television and radio programs; and lectured widely at such places as Westminster Abbey, the Oxford Forum, the University of Notre Dame, and Harvard University. People from all walks of life and nationalities honor Dr. Hawkins as a teacher of advanced awareness, exemplified in the title "Foremost Teacher of the Way to Enlightenment." His life was devoted to the upliftment of mankind until his death in 2012.
“I recommend this book for every spiritual aspirant for climbing the unseen ladder of real spiritual progress.”
— Swami Chidatmananda, Hindu spiritual monk at Chinmaya Mission, Bharat India