The Bigger Picture: How Psychedelics Can Help Us Make Sense of the World (Paperback) 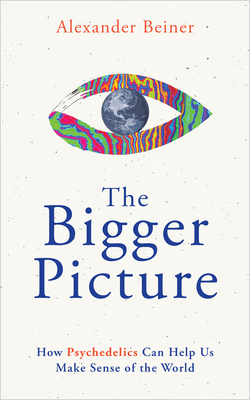 The Bigger Picture: How Psychedelics Can Help Us Make Sense of the World (Paperback)


Coming Soon—Pre-Order Now
Do psychedelic drugs hold the answer to a better world? Can they heal the cultural, spiritual, and emotional wounds we face?

Alexander Beiner, a leading voice in the psychedelic renaissance, believes that psychedelic research is the key to navigating the fractured, weird, and chaotic times we live in.

The Bigger Picture is an accessible, entertaining, and nuanced trip into the world of psychedelics. It explores the effects of the powerful psychedelic dimethyltryptamine (DMT), what we’re learning about metaphysics and neuroscience, and how these findings could significantly change the trajectory of culture. Alexander combines interviews with psychedelic leaders, philosophers, scientists, and celebrities with his own diary entries as a participant in the world-first clinical trial at Imperial College, London investigating DMT. This dimension-shifting book examines:


Embark on a journey into The Bigger Picture—a new era of science and spirituality with the potential to radically transform society…
Alexander Beiner is a writer, cultural commentator, and podcaster. He's one of the founders of Rebel Wisdom, a media and events organization with a quarter of a million subscribers and a focus on making sense of culture and complexity. He's also an executive director of Breaking Convention, Europe's longest-running conference on psychedelic science and culture. He is a leading critical and countercultural voice in the "psychedelic renaissance" and has produced a number of films, articles, and events at the leading edge of the conversation about the potential of psychedelics. www.breakingconvention.co.uk