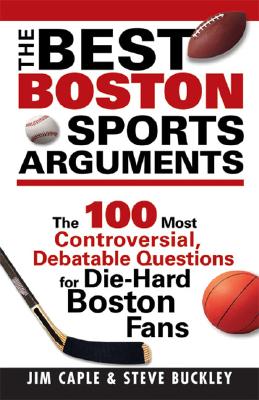 Every Boston fan knows that the only thing better than watching sports is arguing about them--picking the best, the worst and who will come out on top. And no city tears its sports teams apart like we do in Beantown!

Veteran Boston sportswriters Steve Buckley and Jim Caple take you inside the 100 best debates in Boston sports. Covering the Red Sox, Celtics, Patriots, Bruins and beyond, every question you want to debate is here--as well as a few surprises.

Who was the greatest Boston athlete ever: Russell, Bird or Brady?

Was freezing Ted Williams really all that crazy?

The greatest clutch performer in Bruins history: Was it Orr, or was it...?

Which Yankees loss was more painful? Dent or Boone?

Who was better, Ted or DiMaggio?

Jim Caple is a senior writer at ESPN.com, with his weekly baseball column "Off Base" for Page 2 among his contributions. Before coming to ESPN, Jim worked in Minneapolis and Seattle.

Steve Buckley has been been a sportswriter for more than 26 years, and has been a columnist with the Boston Herald since 1995. Prior to joining the Herald, he was a columnist for The National Sports Daily, and covered both the Red Sox and the Yankees for The Hartford Courant.