Sicques, Tigers or Thieves: Eyewitness Accounts of the Sikhs (1606-1810) (Hardcover) 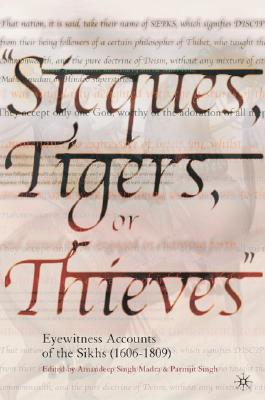 Sicques, Tigers or Thieves: Eyewitness Accounts of the Sikhs (1606-1810) (Hardcover)


Not On Our Shelves—Ships in 1-5 Days
In 1812, Sir John Malcolm, a Lieutenant General in the British Army wrote A Sketch of the Sikhs, commonly believed to be the first account of the Sikhs written by a non-Sikh. In truth, soldiers, travellers, diplomats, missionaries and scholars had provided accounts for many years before. Drawing on this difficult-to-access material, the editors of this volume have compiled a unique source that offers a fascinating insight into the early developments in Sikh history. From the first ever written accounts of the Sikhs by Persian chroniclers of the Moghul Emperor to the travel diary of an Englishwoman, this volume contains material invaluable to those studying the evolution of the Sikh religion as well as to those interested in learning more about this major religion. It also provides an unparalleled look into the growth and solidification of the religious practices of Sikhs. At a time when the misunderstanding of the Sikh religion and those who practise it has reached new and deadly heights, this volume hopes to introduce a wider audience to the roots of its culture. For more detailed information, including examples of illustrations, and selected extracts, go to www.sicques.com.
AMANDEEP SINGH MADRA is an independent researcher based in London. He co-authored Warrior Saints and is currently contributing to Oxford's New Dictionary of National Biography. He is well connected to Sikh organizations in the UK and US. PARMJIT SINGH co-authored Warrior Saints with Madra. He is currently involved in a wide-ranging reconstruction of Sikh history.

"A fascinating account of the Sikhs as seen by foreign travellers in the land which was to become their kingdom. They give us an insight into the macho self-image that Sikhs have to this day - anything you can do I can do better. This spirit of upmanship has sustained the community miniscule in numbers but grand in achievements."--Khushwant Singh, author, A History of the Sikhs

"Better than time travel... a richly-peopled, intimate journey through the dawn of Sikh history."--Christy Campbell, author of The Maharajah's and Fenian Fire: The British Government Plot to Assassinate Queen Victoria