The Philosopher's Toolkit: A Compendium of Philosophical Concepts and Methods (Paperback) 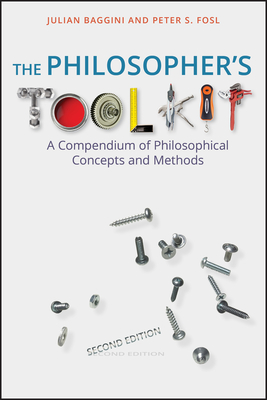 The Philosopher's Toolkit: A Compendium of Philosophical Concepts and Methods (Paperback)


Special Order—Subject to Availability
The second edition of this popular compendium provides the necessary intellectual equipment to engage with and participate in effective philosophical argument, reading, and reflection
Julian Baggini is Academic Director of the Royal Institute of Philosophy and an Honorary Research Fellow at the University of Kent. He was the founding editor of The Philosophers' Magazine and has written for numerous newspapers and magazines, as well as for the think tanks The Institute of Public Policy Research, Demos, and Counterpoint. He is the author, co-author, or editor of over 20 books, including How The World Thinks, The Virtues of the Table, The Ego Trick, Freedom Regained, and The Edge of Reason. Peter S. Fosl is Professor of Philosophy and chair of PPE at Transylvania University, Kentucky. He is author of Hume's Scepticism (2020), co-author of The Critical Thinking Toolkit (Wiley Blackwell, 2016) and The Ethics Toolkit (Wiley Blackwell, 2007), editor of The Big Lebowski and Philosophy (Wiley Blackwell, 2012), and co-editor of Philosophy: The Classic Readings (Wiley Blackwell, 2009). His work covers the history of scepticism, especially in the writings of David Hume, and the philosophical dimensions of popular culture.