The Cuckoo's Egg: Tracking a Spy Through the Maze of Computer Espionage (Paperback) 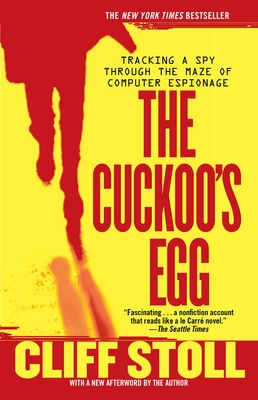 The Cuckoo's Egg: Tracking a Spy Through the Maze of Computer Espionage (Paperback)


Not On Our Shelves—Ships in 1-5 Days
Before the Internet became widely known as a global tool for terrorists, one perceptive U.S. citizen recognized its ominous potential. Armed with clear evidence of computer espionage, he began a highly personal quest to expose a hidden network of spies that threatened national security. But would the authorities back him up? Cliff Stoll's dramatic firsthand account is "a computer-age detective story, instantly fascinating [and] astonishingly gripping" (Smithsonian).
Cliff Stoll was an astronomer turned systems manager at Lawrence Berkeley Lab when a 75-cent accounting error alerted him to the presence of an unauthorized user on his system. The hacker's code name was "Hunter" -- a mysterious invader who managed to break into U.S. computer systems and steal sensitive military and security information. Stoll began a one-man hunt of his own: spying on the spy. It was a dangerous game of deception, broken codes, satellites, and missile bases -- a one-man sting operation that finally gained the attention of the CIA...and ultimately trapped an international spy ring fueled by cash, cocaine, and the KGB.
When, to the delight of the baffled FBI, CIA, and NSA, Cliff Stoll nailed his spy, he wound up on the front page of The New York Times. The story, broken in 1989, quickly gathered headlines across the nation and Stoll became a genuine, if somewhat unlikely, American hero.

An astronomer by training and a computer expert by accident, Cliff Stoll has become a leading authority on computer security, an issue recognized everywhere as among the most important security problems of our times. He has given talks for the FBI, CIA, and NSA, and has appeared before the U.S. Senate. Stoll is an astronomer at the Harvard-Smithsonian Center for Astrophysics and lives in Cambridge, Massachusetts.
"Fascinating...a nonfiction account that reads like a le Carré novel."
-- The Seattle Times

"Stoll's is the ever-appealing story of the little man bucking the system...great fun to read...lively and thoroughly absorbing."
-- The Philadelphia Inquirer

"The Cuckoo's Egg is 'reader friendly,' even for those who have only the vaguest familiarity with computers...a true spy thriller....The hunt is gripping."
-- Chicago Tribune