God's Bankers: A History of Money and Power at the Vatican (Paperback) 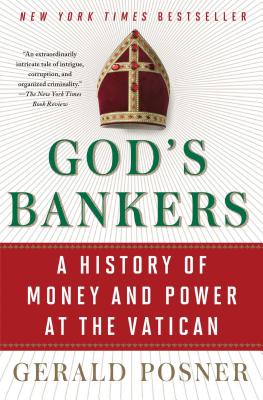 God's Bankers: A History of Money and Power at the Vatican (Paperback)


Not On Our Shelves—Ships in 1-5 Days
A deeply reported, New York Times bestselling exposé of the money and the clerics-turned-financiers at the heart of the Vatican—the world’s biggest, most powerful religious institution—from an acclaimed journalist with “exhaustive research techniques” (The New York Times).

From a master chronicler of legal and financial misconduct, a magnificent investigation nine years in the making, God’s Bankers traces the political intrigue of the Catholic Church in “a meticulous work that cracks wide open the Vatican’s legendary, enabling secrecy” (Kirkus Reviews). Decidedly not about faith, belief in God, or religious doctrine, this book is about the church’s accumulation of wealth and its byzantine financial entanglements across the world. Told through 200 years of prelates, bishops, cardinals, and the Popes who oversee it all, Gerald Posner uncovers an eyebrow-raising account of money and power in one of the world’s most influential organizations.

God’s Bankers has it all: a revelatory and astounding saga marked by poisoned business titans, murdered prosecutors, and mysterious deaths written off as suicides; a carnival of characters from Popes and cardinals, financiers and mobsters, kings and prime ministers; and a set of moral and political circumstances that clarify not only the church’s aims and ambitions, but reflect the larger tensions of more recent history. And Posner even looks to the future to surmise if Pope Francis can succeed where all his predecessors failed: to overcome the resistance to change in the Vatican’s Machiavellian inner court and to rein in the excesses of its seemingly uncontrollable financial quagmire. “As exciting as a mystery thriller” (Providence Journal), this book reveals with extraordinary precision how the Vatican has evolved from a foundation of faith to a corporation of extreme wealth and power.
Gerald Posner is an award-winning journalist who has written twelve books, including the Pulitzer Prize finalist Case Closed and multiple national bestsellers. His 2015 book, God’s Bankers, a two-hundred-year history of the finances of the Vatican, was an acclaimed New York Times bestseller. Posner has written for many national magazines and papers, including The New York Times, The New Yorker, Newsweek, and Time, and he has been a regular contributor to NBC, the History Channel, CNN, CBS, MSNBC, and FOX News. He lives in Miami Beach with his wife, author Trisha Posner.