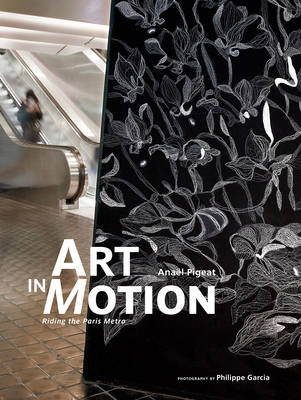 
On Our Shelves Now at:
A rich history and moving look at the accessible, immersive art embedded in the Paris subway system

Submarine wall decorations, a ceramic declaration of human rights, a stained-glass red hen, a mosaic mouth, a Murano glass aedicule. The walls of the Paris Métro, adorned with works by French and foreign artists, have punctuated the underground travels of Parisians and tourists for over a century. In 1900, architect Hector Guimard created the subway entrances. His Art Nouveau style works embrace the notion of free art—accessible to all, flowing with movement, surprising, and ambitious. Today’s subway system still champions this immersive cultural experience and artistic openness as evidenced by the 20 or so creations selected for Art in Motion. With concise and well-researched texts, Anaël Pigeat, introducing us to the artists and giving them a voice, explains their creative process, paying tribute to the work of the many craftsmen and craftswomen and their innovations, while highlighting the numerous constraints entailed by the subway environment. With a contemporary perspective by photographer Philippe Garcia, the book captures the works in their environment, then moves closer to show us the material and the artistic gestures. Each creation carries its own story and its own relationship to the underground: offering a reinterpretation of existing works or taking us down memory lane, they lead us into a dream–like world or fit in the framework of an international exchange, these works shine on and imperceptibly change our travels.

Anaël Pigeat is an art critic, editor-at-large for The Art Newspaper France, a journalist for Paris Match, a columnist for France Culture, as well as an exhibition commissioner and author of exhibition catalogues and books on contemporary design. She holds a master’s degree in contemporary arts from the École du Louvre and a master of arts from London’s Courtauld Institute. Philippe Garcia is a gifted photographer whose talents span the art of still life as well as stage production and reporting. He works for the fashion industry, media, and advertising. He has authored, among other works, the photographs for Louboutin (Rizzoli), Longchamp (La Martinière), Piaget (La Martinière), Pierre Frey, Inspiring Interiors (La Martinière), Napoléon: A Private View (Le Seuil).