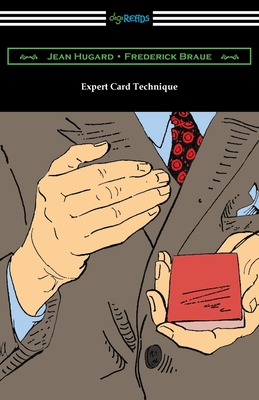 "Expert Card Technique" by Jean Hugard and Frederick Braue is a detailed and instructive guide on how to master the manipulation of cards. Jean Hugard, born John Gerard Rodney Boyce in Queensland, Australia in 1872, began his professional career as a magician in 1896 and eventually moved to America in 1915 where he worked in vaudeville and as a stage magician. He retired from performing professionally around 1930 and began a prolific and successful career writing books on magic. As he became older and lost his eyesight, the magician Frederick Braue began co-writing several books with Hugard on the art of card magic. Braue was a journalist and semi-professional magician who specialized in card tricks and was viewed as a master at this skill. In their book "Expert Card Technique", these magical geniuses show even the most novice beginner how to learn to manipulate cards in basic ways and then moves on to teach more advanced flourishes, such as forces, fans, and prearranged decks. This guide is indispensable to anyone who wishes to handle cards with impressive dexterity and for those studying magic, as these are skills that must be mastered before complicated card tricks can be performed with ease. This edition is printed on premium acid-free paper.