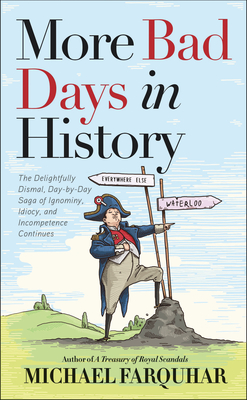 
On Our Shelves Now at:
In this delightful sequel to his sleeper hit Bad Days in History, best-selling author Michael Farquhar delivers another eye-popping collection of unhappy days starring some of history's most famous, infamous and, unfortunate personalities caught up in a rich assortment of wretched episodes.

Here you will find a politically smeared George Washington, a cranky Colonel Sanders, a homicidal Saint Olga of Kiev, a cuckolded Napoleon, a flame-censored Steinbeck, a treacherous Douglas MacArthur, a weeping Einstein, an exasperated Charles Dickens, a humiliated King Henry II, and a faux-contrite Ted Kennedy. And that's just in July!

From the decadent palaces of ancient Rome to the modern Halls of Congress, this illuminating (sometimes disturbing) narrative features an almost endless array of misbehavior, amusing mishaps, and breathtaking misfortune over the ages and across the historical spectrum. Each less-than-red-letter day of the year is recounted in Farquhar's wry voice and comes with the enduring lesson The Wall Street Journal found in the first volume of this series:
"Bad Days in History may offer consolation to the great mass of quotidian belly-achers ... whose piddling misfortunes and regrets will snap neatly into perspective when set against [this] record of idiocy and disaster."
MICHAEL FARQUHAR, a former writer and editor at the Washington Post, is the best-selling author of numerous books, including the critically acclaimed Behind the Palace Doors and Secret Lives of the Tsars, as well as the popular Penguin Treasury series: A Treasury of Royal Scandals, A Treasury of Great American Scandals, A Treasury of Deception, and A Treasury of Foolishly Forgotten Americans. He lives in Washington, D.C.