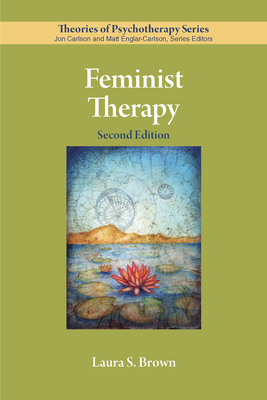 
Backordered
In this second edition of her popular book, Laura S. Brown reviews the history, theory, empirical basis, and practice of feminist therapy, a groundbreaking approach that not only listens to, but privileges, the voices and experiences of those who have been defined as "other" by dominant cultures. Feminist therapy has evolved significantly from its early days. Originally it functioned primarily as a corrective against the sexist approaches of the era, whereas now it has become a sophisticated, postmodern, technically integrative model of practice that uses the analysis of gender, social location, and power as a primary strategy for comprehending human difficulties. Feminist therapy is no longer just for women--it has grown to encompass work with women, men, children, families, and larger systems. New to this edition is an updated discussion of the sociopolitical environment for women and other marginalized groups, updated research, and more inclusive terminology and discussion of transgender and nonbinary individuals.

Laura S. Brown, PhD, received her doctoral degree in clinical psychology in 1977 from Southern Illinois University at Carbondale and has been in practice as a clinician and forensic psychologist in Seattle since 1979. She has served on the faculties of Southern Illinois University, the University of Washington, and the Washington School of Professional Psychology. A Diplomate in Clinical Psychology and a Fellow of 10 American Psychological Association (APA) divisions, Dr. Brown's work in the fields of feminist therapy theory and trauma treatment has received numerous awards from her peers, including the Distinguished Publications Award of the Association for Women in Psychology, APA's Award for Distinguished Professional Contributions to Public Service, the Sarah Haley Award for Clinical Excellence from ISTSS, and the Carolyn Wood Sherif Award from the Society for the Psychology of Women. Her books include Subversive Dialogues: Theory in Feminist Therapy; Recovered Memories of Abuse (with Kenneth S. Pope); and, most recently, Cultural Competence in Trauma Therapy: Beyond the Flashback. She is the therapist featured in two videos on trauma treatment and one on feminist therapy in the APA Psychotherapy Video Series, as well as the Feminist Model of Supervision video in the APA Supervision Video Series. She was a founding member of the Feminist Therapy Institute and is a past president of the Society for the Psychology of Women, the APA Division of Trauma Psychology, the Society for the Psychology of Sexual Orientation and Gender Diversity, and the Washington State Psychological Association.