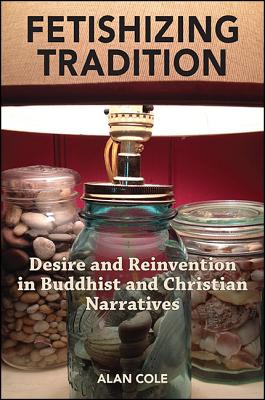 
Special Order—Subject to Availability
This innovative work documents the literary gesture that "fetishizes tradition," making long-standing religious traditions appear present and available through the reading experience. Taking as examples Paul's Letter to the Romans, the Gospel of Mark, the Sūtra on the Land of Bliss (Sukhāvatīvyūha), and the Platform Sūtra of the Sixth Patriarch (Liuzu tanjing), Alan Cole shows how these texts invite readers into the fantasy that they can leave behind tradition's established rites, rituals, sacrifices, institutions, and festivals in order to take up just the text and its narrative as the key to salvation. Ironically, then, one's salvation is determined by how one receives the (new) message of salvation. Crucial to making these more virtual forms of tradition appear plausible is the reconstruction of tradition's "truth-fathers"--God or the Buddha, as the case may be--so that they appear to endorse the legitimacy of these new ways of being traditional. Relying on a wide body of critical theory, this book presents an intriguing way to rethink key elements in Christian and Buddhist thought.
Alan Cole is an independent scholar and the author of Fathering Your Father: The Zen of Fabrication in Tang Buddhism; Text as Father: Paternal Seductions in Early Mahāyāna Buddhist Literature; and Mothers and Sons in Chinese Buddhism.