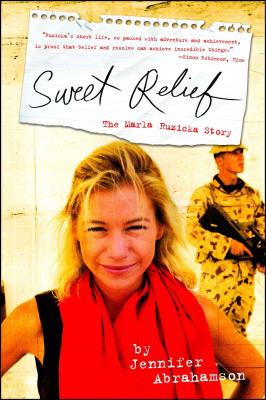 
Not On Our Shelves—Ships in 1-5 Days
Sweet Relief is the remarkable story of how twenty-eight-year-old Marla Ruzicka took on the US government, changed the world, and made the ultimate sacrifice.

Marla Ruzicka was a free spirit, a savvy political operator, a wartime Erin Brockovich. Fiercely determined to improve the lives of the less fortunate, the twenty-something blonde was instrumental in convincing the U.S. government to pass historic legislation aiding civilian victims of war.

Sweet Relief recounts Marla's journey from an idyllic childhood in a small California town, through Latin America and Africa, and finally to the war zones in Afghanistan and Iraq. Whether she was Rollerblading the halls of Congress to secure funds for civilians in Iraq or throwing parties for journalists in Kabul to raise awareness of her cause, no one who came within a hundred yards of Marla missed her. Her friendly smile and indefatigable pose were ubiquitous in Afghanistan and Iraq where Marla managed a door-to-door effort to identify war victims.

While Marla worked tirelessly to care for others, in many ways she neglected herself. A diagnosed manic-depressive, Marla battled extreme emotional lows and an eating disorder. And although she brought love into the homes of the aggrieved, she often struggled to find a love of her own.

Marla gave the invisible victims of war a voice and, in the process, helped to win them millions of dollars in unprecedented aid. Tragically, Marla was killed by a suicide bomber on Airport Road in Iraq in April 2005. Weeks later, the US government named the program she fought so hard to establish The Marla Ruzicka Fund. Her life and legacy are an inspiring reminder that love and determination can conquer all.
Jennifer Abrahamson has written for the Associated Press, Slate, Salon, Vanity Fair, ABC News, and other media outlets. She has also worked with the United Nations World Food Program. Most recently, she spent several months in the Sudan as a media spokesperson for the humanitarian wing of the UN Secretariat.