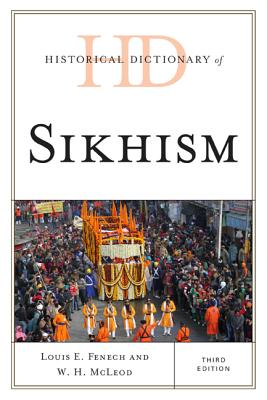 
Not On Our Shelves—Ships in 1-5 Days
Sikhism traces its beginnings to Guru Nanak, who was born in 1469 and died in 1538 or 1539. With the life of Guru Nanak the account of the Sikh faith begins, all Sikhs acknowledging him as their founder. Sikhism has long been a little-understood religion and until recently they resided almost exclusively in northwest India. Today the total number of Sikhs is approximately twenty million worldwide. About a million live outside India, constituting a significant minority in the United Kingdom, Canada, and the United States. Many of them are highly visible, particularly the men, who wear beards and turbans, and they naturally attract attention in their new countries of domicile. This third edition of Historical Dictionary of Sikhism covers its history through a chronology, an introductory essay, and an extensive bibliography. The dictionary section has over 1000 cross-referenced entries on key persons, organizations, the principles, precepts and practices of the religion as well as the history, culture and social arrangements. This book is an excellent access point for students, researchers, and anyone wanting to know more about Sikhism.
Louis E. Fenech is professor of South Asian and Sikh history at the University of Northern Iowa. His research concerns the history of the Sikh people and their tradition. W.H. McLeod (1932-2009) was professor emeritus of history at the University of Otago in Dunedin, New Zealand. His area of expertise covered the Sikh tradition.