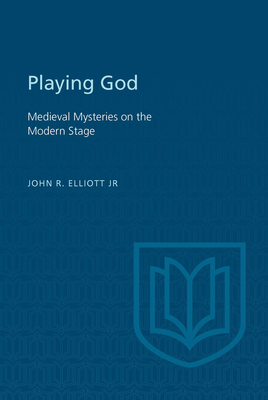 Religious drama was one of the most vital art forms of the medieval era. In medieval mystery plays, God appeared as one of the characters, along with angels, saints, the devil, and others. Until very recently however, the revival of interest in medieval culture has not included drama, beacuse of a lingering fear of blasphemy associated with the representation of God on the stage. In Britain this fear was the legacy of a theatrical censorship which has been exercised by the Lord Chamberlain's office for hundreds of years. Since that power was abolished in 1968, medieval religious, or mystery, plays are once again appearing on the stages of many countries.

John R. Elliott Jr. studies the modern context of this important medieval genre. He begins by describing general attitudes towards religious drama from the time of the reformation, the popularity of the Oberammergaru Passion Play in Victorian times, and specific attempts by producers to overcome official hostility to religious plays. He traces the history of the major modern productions of the mystery cycles, such as the York Festival and the Bristol University performance of the Cornish Ordinalia, and provides information about the careers of the two leading pioneers of modern mystery-play production. The concluding chapter discusses the chief practical and aethetic problems involved in staging mystery plays for modern audiences, and assesses the overall importance of their revival in the larger context of British there today.