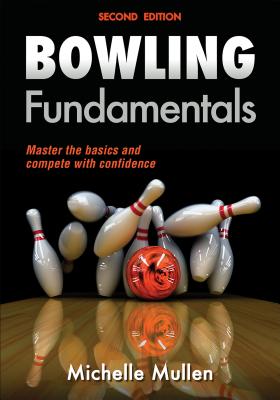 Hit the lanes and enjoy every frame! With Bowling Fundamentals, Second Edition, you’ll learn the game, skills, and tactics so you can play and compete at the highest levels.

With almost three decades of experience that includes multiple PWBA titles and collegiate championships, former Team USA Coach, Michelle Mullen shares the secrets that have made her one of the world’s most highly sought-after instructors for bowlers of all ages and skill levels. Covering the latest equipment and the essentials of execution—footwork, approach, arm swing, timing, finish position, and release, and follow-through—Mullen leaves no skill uncovered, including insight on making in-match changes for varying lane conditions. Specific instruction, photos, and illustrations for left-handed bowlers are featured for every shot. You’ll find tactical tips for picking up the game’s most common spares (in both a traditional and advanced spare-shooting system), advice for keeping emotions and nerves focus in check, and basic and advanced lane-play strategies that will make a significant impact on the score sheet.

Before you take to the lanes for your next league night or match or just for fun, add a copy of Bowling Fundamentals, Second Edition, to your bowling bag and turn those open frames into solid strikes and spares!

Mullen has competed and won championships at every level, including high school and collegiate bowling and Professional Women’s Bowling Association (PWBA) regional and national bowling. She holds four national titles and a record nine regional titles in the PWBA. She was also the 1990-1999 PWBA Regional Player of the Decade. In 1985 she represented the United States in the World Cup in Seoul, Korea, and is a former coach for the U.S. team.

Mullen is also an established international writer and author. She has been published in Bowler’s Journal, Bowling Magazine, Bowling This Month, Asian Bowling Digest, and various other publications. The first edition of Bowling Fundamentals was translated in Russian and Simplified Chinese. She is a member of the International Bowling Media Association.

Mullen enjoys working out, gardening and cooking, but her greatest passion is to help homeless animals in need. She and Sill run an annual fundraising event, called “Bowl-4-Animal Rescue” (bowl4animalrescue.org), with 100% of the proceeds benefitting local animal charities. Mullen is from Chicago and lives in Livonia, Michigan, along with her 3 dogs and four cats, who insist that “rescued is her favorite breed”.

“In the second edition of Bowling Fundamentals, Michelle combines her vast knowledge of the game and almost three decades of experience as a world-class player and premier coach to help bowlers of all ages and levels advance their skills and techniques.”

“Michelle Mullen’s passion for bowling shines in the second edition of Bowling Fundamentals! Regardless of your skill level, this great book provides the technique instruction and motivational tips so you can learn and enjoy the game.”

“After reading this book, I came to the conclusion that it’s the greatest book on bowling that I have ever read, and at age 73, I’ve read a lot of them! I have been using the book as an instructional guide for three years, and it has helped me change my bowling game for the better. This book focuses on both the physical and mental aspects of the game, which makes it the most comprehensive book on the techniques of bowling.”